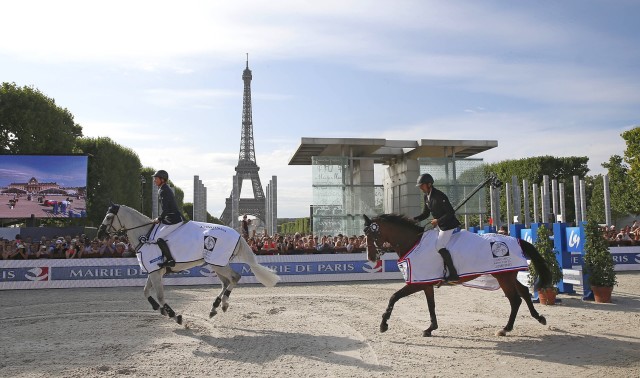 Usually the head-to-head video lets you see where one rider edges the other out … but not for this Global Champions Tour Grand Prix, where the jump-off resulted in a dead heat!

Ties are a rare occurrence at the Grand Prix level, but that’s exactly what happened at the Global Champions Tour stop in Paris, France over the weekend. Right under the iconic Eiffel Tower, just three riders made it clear to the jump-off: Edwina Tops-Alexander of Australia, Karim El Zoghby of Egypt and Ben Maher of Great Britain.

Tops-Alexander went fast and clear with a 33.63, but Karim El Zoghby edged her out by nearly two seconds with a 31.85. And then, to the surprise of everyone, Ben Maher rode exactly the same time. The split-screen view of the two jump-off rounds really shows where each rider lost or made up time:

Both riders stated that sharing the podium was a career first, and while of course each rider wished to win, they were happy and gracious to split the victory.

The Longines Global Champions Tour heads next to Portugal for its ninth stop, heading into the second half of the season. Currently, Portugal’s own Luciana Diniz leads the rankings by 44 points over last year’s champion Scott Brash of Great Britain.