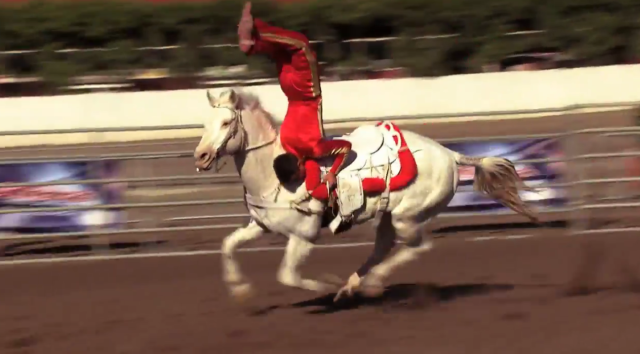 ‘America’s Got Talent’ got a healthy dose of horses last week as Wild West Express raised some dust.

America’s Got Talent, the television series that features a wide variety of undiscovered talent competing for a top prize of $1 million, left the stagelights behind for an episode on June 30th, 2015 when Wild West Express thundered into auditions. This quintet of young trick riders left host Nick Cannon and the panel of judges speechless with their high-speed acrobatics on (or off) the backs of their horses and ponies:

Wild West Express made it through to the next round of competition in the long-running reality series. The group is a fourth-generation equine acrobatics troupe, featuring the four Griffith brothers Gattlin, Callder, Arrden and Garrison, and the sole girl Demi Trepanier. The fast-riding youth range from age six to sixteen. The eldest, Gattlin Griffith, may be familiar as well as a TV and film actor; younger brother Callder has also had a handful of screen roles.

We wish Wild West Express continued good luck as they compete their way through America’s Got Talent — we love to see equestrians getting some mainstream attention!