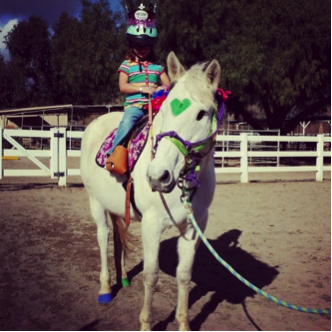 Harry Collins suffered a Traumatic Brain Injury from a polo accident and began riding at REINS Therapeutic Riding Program located in Fallbrook, California in 2009. Harry’s accident affected his motor skills, speech and memory. Years before, Harry’s polo mount “Foolie” had her own polo accident that caused her to lose her left eye. She was officially retired, but after Harry’s family witnessed the benefits of therapeutic riding, his wife, Judy, offered Foolie to REINS. The Argentinean bred mare became an official member of the therapeutic riding program’s herd in 2011 and was dubbed PATH International’s Region 11 Therapeutic Horse of the Year in 2012.

Here are just a few of the stories from people who have had their lives touched by this amazing horse.

“Foolie’s handicap is a big deal for a horse. Horses use their eyes to keep track of their surroundings. Without her left eye, Foolie had to learn to survive in her world. She learned to use her other senses, her hearing and, her sense of touch and ‘feel’. Many horses, on the loss of an eye, have to be euthanized, as the loss is too much for them to adjust to. The animals become so fearful and stressed, they become dangerous to themselves and others. So it’s pretty exceptional that Foolie was even able to be ridden again, much less become a therapy horse.

Because of her previous training as a polo pony, Foolie is extremely sensitive to the rider’s body movements and balance correction. She is able to either direct rein, or neck rein which is great for the various levels of ability of our clientele. When Foolie was being introduced to the different tools and obstacles that we use daily in the program, we started leading her on the right side (opposite of the typical leading position) to give her the visual confidence of the leader that she could rely on. We were careful to cluck to her when approaching her on her blind side so she was aware of what was happening where she couldn’t see; the more she trusted that we would not surprise her, the more desensitized she became to the tools. When lunging I cluck to her constantly in a rhythmic beat so she is constantly aware of where I am in the circle. This seems to keep her at ease and in good consistent rhythmic gaits.

Over time Foolie became very comfortable with the therapeutic riding world; in 2012 we nominated her for PATH International’s Region 11 Therapeutic Horse of the Year and she won! Foolie will continue her valuable work here at REINS until she is ready to formally be retired to pasture.”

“Harry, his balance, coordination and speech affected by his accident, needed a horse that could always be trusted to remain quiet and still. Would Foolie be able to help when she had her own limitations? As she settled into lessons at REINS, I began to hope she could. The loss of her left eye only made her more sensitive to the rider, more aware of her environment. Finally we decided to take the chance.

Harry’s entourage (including 9 family members armed with cameras and video recorders) came to watch the event. As I guided Foolie up to the mounting block, I whispered words of encouragement, comforting myself more than she needed it. Foolie stood still and quiet as Harry lifted his leg over her back awkwardly. She did not even respond as his knee bumped her back. Once mounted, it was magic. Harry seemed to remember Foolie and she him. They were a team, weaving through the arena just like the ‘old days.’ Words truly cannot describe what took place that day. Harry even handed off a ring to his grandson Chris, as if to say ‘I’m still here and I still have so much to offer you.'”

“Foolie is such a special part of the REINS herd. Not only does she provide a great example of overcoming obstacles, she is also a great teacher for our volunteers. When working with Foolie, volunteers learn the importance of a horse’s senses as well as how to adapt to different situations (like leading from the opposite side.) She is patient and sweet with all of our newest helpers. We adore our Foolie Girl!”

“Izzy is eight years old and she has Turners Syndrome. Sometimes because of this, Izzy can get very anxious so it was very important for me to find a horse that Izzy felt comfortable with. When Izzy’s pony that she had been riding left to find a new job, we were on the hunt again to find a new horse or pony for Miss Izzy.

When I introduced Izzy to Foolie they seemed to bond right away. It didn’t seem to matter to Izzy that Foolie only had one eye. They seemed to know they are both special girls and needed each other. Foolie has helped Izzy from needing myself and a side walker during her weekly lessons to riding and trotting independently at our horse show. Foolie has truly given Izzy the confidence she needed to become a terrific rider.”