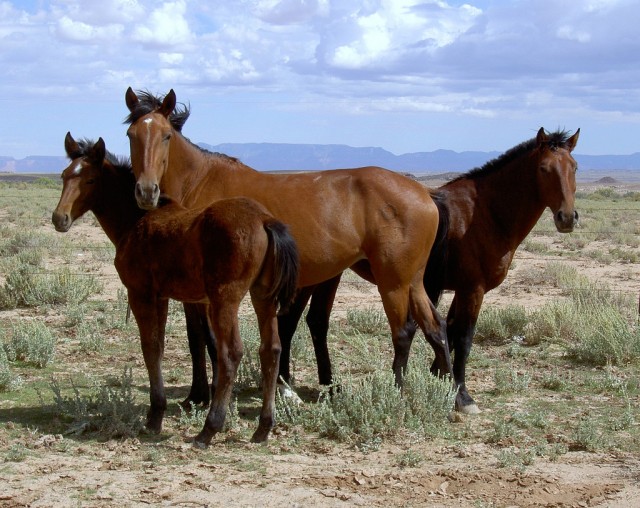 The Bureau of Land Management recently announced plans to begin using the PZP vaccine on the Onaqui herd of Utah.

The Bureau of Land Management, charged with overseeing America’s wild horse herds, recently announced that the Onaqui herd of Toole County in Utah will be darted with the PZP vaccine in an effort to control populations. The Porcine Zona Pellucida “birth control” vaccine is derived from pig egg cells and stimulates an immune response in horses that prevents fertilization of eggs. This drug, shortened to PZP, allows normal herd behavior to continue but merely prevents mares from getting pregnant. The vaccine typically lasts about a year.

PZP is nothing new to animal management: the drug is used on game reserves and in zoos all over the world to keep animals at a sustainable number, preventing destruction of habitat and slow death by starvation. It’s nothing new to the horse world, either: the famous Chincoteague pony herds have been receiving PZP vaccines for years to keep herd numbers at a level that’s supportable by the limited island environment. PZP isn’t even new to mustangs: 35 sites use the vaccine to manage herds, most famously the Pryor Mountain herd on the Wyoming/Montana border.

However, the use of a contraceptive in one more herd marks yet another step on the road to reducing the need for expensive and dangerous “gathers,” or wild horse round-ups. The current, more widely-used model for mustang population control used by the BLM is to round up wild herds, remove the number necessary to return herds to a level supported by the range land, and then hold selected horses in facilities until they can be adopted out. This highly-impractical system is providing far more horses than the public will ever adopt, meaning that thousands of mustangs are living out nearly their entire lives in holding facilities at the cost of taxpayers. Half of the BLM’s annual budget currently goes to these holding facilities — money that could be much better spent on more sustainable methods of population control.

Mares will receive the PZP vaccine via dart gun. The BLM will build a photographic “registry” of mares in the herd to make sure that the correct horses are receiving the drug. While this program appears to be a step in the right direction for managing the wild horse herds without the need to kill or remove animals from the range, critics are quick to claim that the drug can permanently disrupt a mare’s ability to reproduce later in life. However, the success of the vaccine for managing the healthy Pryor Mountain herd shows that PZP simply works, for the benefit of the rangelands, taxpayers, the BLM and most importantly, the horses.