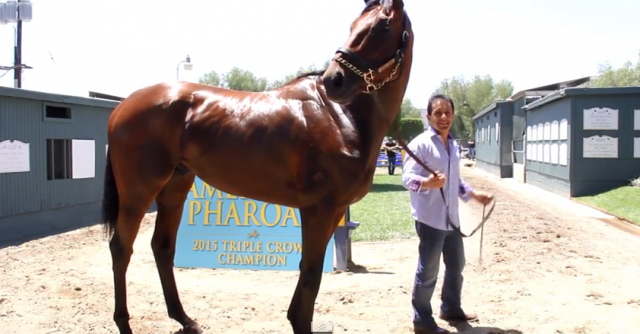 American Pharoah, conqueror of the Triple Crown, has returned to his home track with all the pomp and circumstance that befitted our newest racing hero. AP is based out of Santa Anita Park in Arcadia, California and arrived back home on Thursday, June 18 to a crowd of welcoming fans.

En route from Belmont Park, the Pharoah made a stop at Churchill Downs to parade before a crowd of about 30,000 fans, pausing in the saddling barn in the #18 stall where he began his Triple Crown journey. Owner Ahmed Zayat, trainer Bob Baffert and jockey Victor Espinoza accepted engraved trophies commemorating the colt’s Kentucky Derby victory.

American Pharoah (with his trusty sidekick Smokey) then flew to California and was vanned with police escort back to Santa Anita to greet his West Coast fans.

American Pharoah will be paraded on June 27th as part of the festivities surrounding the Santa Anita Gold Cup, and a large crowd is again expected to see America’s latest racing phenomenon on display. American Pharoah is preparing for the next chapter in his racing career, with several big summertime stakes and the fall’s Breeders Cup on his tentative schedule.