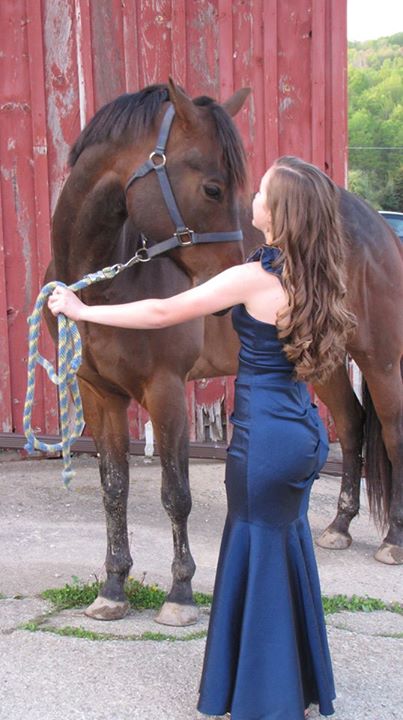 Haley Ruffner refuses to be stereotyped!

“Horses are not my whole life, but they make my life whole.” I’ve heard and read these words countless times and, although I do not know who originally penned this adage, it always strikes me as poignantly truthful. I’ve found that most non-equestrians tend to assume that if someone has horses or rides, that is all he or she does. And while it is a time-consuming hobby, it’s frustrating to be stereotyped as having no life because of horses (although there are some times when I believe it too.)

I can recall one scenario a few years ago during which a boy my age texted me “Hey” several days in a row at the same time of day, and the generic “How are you” or “What’s up” replies followed — he discovered that each time he texted me, I happened to be cleaning stalls. Not exactly riveting news, but I’m not one to lie just for the sake of impressing someone. I was, however, a little taken aback (if not slightly offended) by his reply on the third day, which was something along the lines of “lol is shoveling poop all you do?” From my perspective, this would be akin to asking someone each day what they were doing at 8 A.M. and being surprised to find that they were eating breakfast every time you asked.

I have horses at my house. They poop a lot. I have to clean it. Every day. Obviously.

I found myself, at the time, weaving myself into the stereotype someone else had created for me: I replied back that yes, pretty much all I did was barn chores. It was a fairly ridiculous response to a sarcastic question, but it was easier and less awkward than trying to argue that I was, in fact, a multifaceted person who had several hobbies other than riding and that cleaning stalls was simply one of many things I did throughout the day.

Horses are, without question, a huge part of my identity. In describing myself to a stranger, one of the first things I will say is that I am an equestrian … but then I will probably go on to say that I love to read and write, I play softball and crochet. I love my horse and I prioritize riding over several activities that my peers partake in, and my weekends are spent at horse shows rather than parties, but there is more to my life than riding. I would not be who I am without horses, but neither is my every waking moment occupied with riding. There always has to be a balance — as much as I might want to skip school or the occasional social gathering to ride, it’s only healthy to have multiple hobbies.