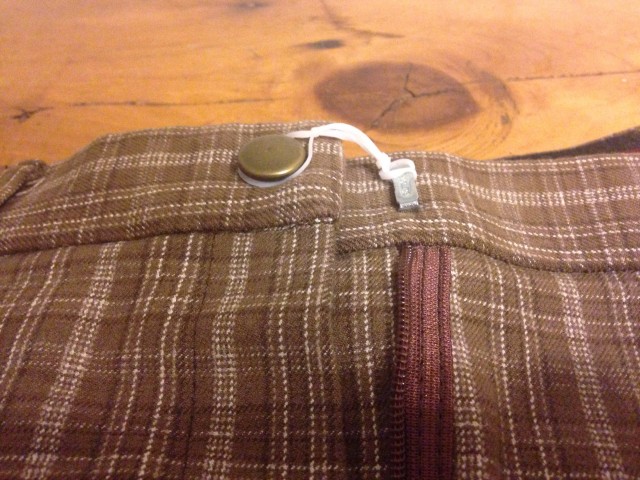 Horse apparel companies, we need to have a talk.

Since this is my first pregnancy, my body has followed the traditional notion that you tend not to expand outward quite so quickly the first (or only) time around. Your muscles take their time making room for the future ballooning that will occur, and you can get quite a bit of use out of your regular breeches and tights in those early months.

I did especially well, because thanks to fluctuating pounds here and there over the years, I had a solid collection of breeches in several sizes and styles. I started my pregnancy very near to my lightest weight as an adult (thank you, barn chores!) and had plenty of room to grow into bigger breeches over the next few months.

But at some point, I started to notice that when I got home from the barn, I would change my clothes and exhale like I had been holding my breath for three hours. In addition to being pretty uncomfortable, not breathing is probably not the best way to assure that the fetus you’re solely responsible for oxygenating is a super happy camper. At that point, I knew I had to start getting creative.

What ensued was something akin to the montage of Wile E. Coyote cartoons as he obsessively buys or builds every bizarre invention to brutally murder the roadrunner, but I was dead-set on maintaining my image as an equestrian. I first started by trying to find actual maternity breeches. I only found one company that makes them (custom!) for a pretty penny, but I just couldn’t justify spending more on breeches that I would only use for a few months than ones I would try and make last for 5-10 years (you know, like, all my other breeches.) After reading Facebook and Twitter comments from this series and seeing how many women ride until they’re seven, eight, even nine months pregnant, I feel like you’re missing a major corner of the market, every horse apparel company ever. HN would be happy to do a product review when you decide to tackle this idea.

Next was buying a belly band, which in theory starts at the top of your belly and ends below your (mercifully open) zipper, and just looks like a tank top under your shirt. While these were great for regular life, I found that the simplest of barn chores like picking hooves or mounting would send the darn thing to curling up or riding down, and leaving me pretty red in the face.

I then tried the rubber band trick. This involves doing up your zipper as far as you can, and then slipping a rubber band (or a series of braiding bands, in this case) through the hole of your pants and around the button. This worked alright for awhile, actually, besides the constant worry about whether or not the treasonous zipper had decided to stay up in its precarious halfway position.

By late March, a new challenge presented itself: a spring schooling show, which I knew would be my last hurrah before giving up on “nice breeches” until fall. I only had one pair in a reasonably larger size that were acceptable for even a schooling show, and I knew I was pushing them to their limits as it was. What ensued to survive that day involved a barn village of help, my husband’s belt, several more braiding bands, duct tape, a long vest and a prayer, but I’m fairly confident that the judge probably never saw my underpants. (Sadly, I did not document this masterpiece with photographic evidence. I should have.)

After that day, I gave up on my breeches and rode in my last pair of uber-stretchy low-rise tights as long as I could (they’re ROMFH tights that I believe have been discontinued, but I still highly recommend anything by the company) , and then finally in maternity jeans precariously tucked into overstretched groaning half chaps. Like poor Wile E. Coyote at the end of a long showdown in the desert, I had been foiled, but would live to fight another day. Between the limits of my wardrobe, my mount, my ever-changing body and my increasingly anxious mind, I knew that the end of my time in the saddle was approaching, and bigger decisions were on the way than how to not look ridiculous. But sometimes it’s the silly things that keep you sane when you decide to upend your entire life.

UPDATE: A citizen of Horse Nation shared a terrific link on the Facebook Thread for this article to make your breeches maternity-friendly if you’re even the slightest bit crafty! Thanks Molly for the tip, and check it out if you’re in the same boat as us: http://www.craftster.org/forum/index.php?topic=28377

Lorraine has been a regular contributor to Horse Nation since its inception in 2012. Her non-horsey but seriously awesome husband Dan, her 5-year-old BLM mare Itxa, Australian Shepherd Rev, and stupid cat Jeoffrey live in the beautiful Rocky Mountains of Utah. They are stoked to invite another human into the Zoo in July, 2015. And because she gets this a lot, her horse’s name is pronounced EEE-chah, and yes, horse show announcers and organizers can and should hate her for her horse-naming hubris.