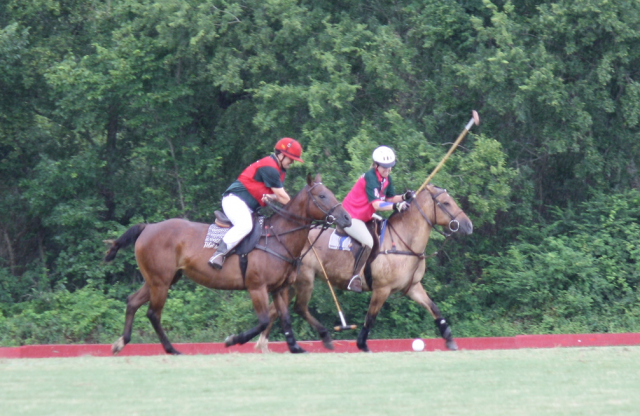 Well, not until it ends.

I started this journey four months ago, when I decided on a whim to take a 2-hour introductory polo lesson at the Houston Polo Club. Now here we are, one trip to the U.S. Open Polo Championship and 10 weeks of polo school later, and I’m fairly emotional about reaching the finish line.

Here’s the thing… I signed up to learn a sport, basically to add yet another horse discipline to my “Jack of All Trades” roster. I assumed I would love it, because I love anything that involves horses. I also assumed that it would be loads of fun. What I didn’t expect was to become so passionate about the game and to feel like I gained a few more family members in the process. I’m going to miss this group of people every Tuesday and Saturday, I really am.

But before I get overwhelmed with sentimentality, let’s get to the polo school recap. Last time I talked about Line, Man, Ball. This week I’ll show you how we learned to steal the line and, in essence, the ball.

There are two sides to the horse: near side and off side. Let’s start near side, because basically you only have one option here – to ride your opponent off. This involves a very aggressive maneuver where you come in parallel to your opponent and push them off the line of ball. The important thing is that both horse’s shoulders have to be in line and you must be riding at the same speed. If you cross in front of your opponent, that’s a foul. If you’re too far behind your opponent, you can t-bone them and that’s a foul.

Clear as mud? Here’s a video to clarify.

On the off side, you have two more options – the most important being the hook. Hooking involves riding up to your opponent and stopping their mallet with your own. The ball is then “loose” allowing one of your teammates the opportunity to steal the play.

The move is very satisfying to both complete and escape. One of the more glorious moments of my polo school was when I managed to get away from my instructor, Barlee Flanders. It felt amazing. Look closely and you’ll notice my ear to ear grin.

I did not however survive this attack from my other instructor Mark Prinsloo.

Here I am doing a little hooking of my own.

Our polo school concluded with a scrimmage in the pouring rain. I’m pleased to report that my team, unofficially dubbed ‘Pretty in Pink,’ reigned victorious. My teammate Mike scored several goals, cleaning up after me twice when I lost the ball. Josey was undoubtedly our queen of turnarounds, staying calm in the pack long enough to get a backhand and change the direction of play. Here’s a look at one of my goals. 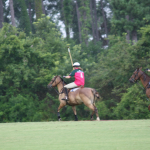 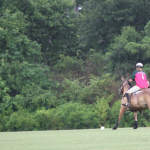 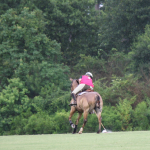 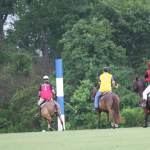 But at the end of the day the points didn’t matter, because I don’t think anyone – winners, losers or instructors – could stop smiling. What a marvelous game.

I personally can’t wait to get back in the irons and play again. It’s going to be a long four weeks until my summer league starts. A big thank you to the Houston Polo Club, Barlee and Paige Flanders and Mark Prinsloo.