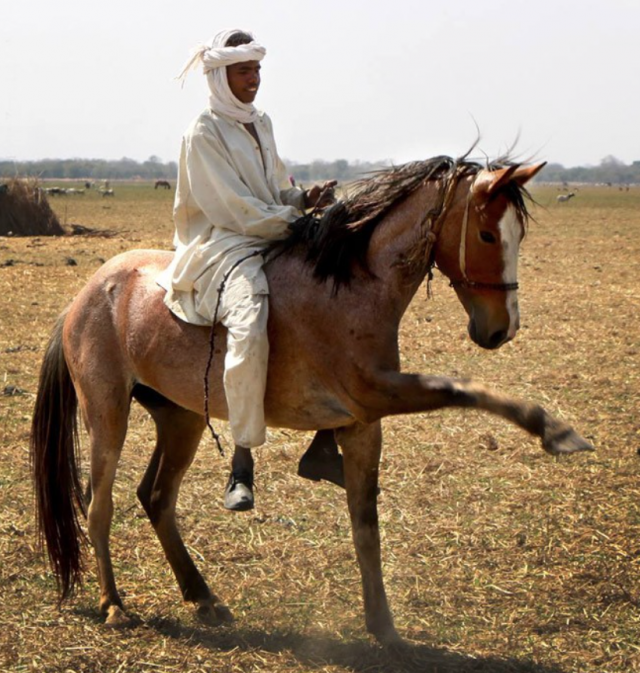 No trains, planes or automobiles here.

Zakouma National Park is located in the Salamat Region of south-eastern Chad. It has been described as one of the last strongholds for Central African wildlife and is considered a major conservation success story.

In an effort to protect giraffes, the park was created in 1958. But for fifty years, the area was plagued with poachers who eventually led two species, the Western Black Rhino and Lord Darby’s Eland, extinct. The slaughter continued well into 2008 when a staggering 2,000 elephants were killed. Elephant slaughter is hardly new to the region. This painting dates back over 100 years.

The true problem is that traditional spears have been replaced with automatic assault rifles. Poachers fire into herds indiscriminately, killing upwards of 30 individuals in a single attack and leaving most to die of festering wounds. As testament to this horror, in 2008 there were no elephants under the age of five within Zakouma Park. Scientists were unsure if poachers were targeting younger animals or if the elephants had simply stopped breeding due to the trauma.

In 2010, the government of Chad, with the help of the European Union, approached African Parks to take on management of Zakouma. The first step was to outfit several elephants with GPS collars. The elephants are monitored 24/7 from both a central control room and on the ground via horseback. The park has a total of four horse patrol teams, made up of 30 or so horses, patrolling the breeding herds at all times.

The direct result of this program is that no elephants have been poached inside the park since October 2011. Newborn elephants calves are being born for the first time in over decade.

Africa Geographic reports the horses are “all Chadian stallions descendent from the Spanish Barb or Berber horse believed to have originated in north Africa during the 8th century when Muslim invaders reached the region.”

The local community is heavily involved in breeding the horses. Not only does this stimulate the economy, but it fosters goodwill between the park and her neighbors. When a prized racing stallion, Horus, was donated to Zakouma’s community program, stud services were offered to local communities. “We have community game guards in a similar nomad community to the north of the park, that assist the park with patrolling their area on their horses and providing information on a secure digital radio network,” explains Potgieter to Africa Geographic. “Being in constant contact and in collaboration with the park and the rangers brings tangible security benefits and employment to these communities.”