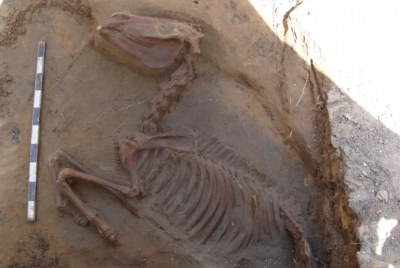 The fossil was found during a restaurant construction project. Luckily, the restauranteur brought in city archaeologist Carl Halbirt as soon as the remains were discovered. “This is the only horse burial we have ever uncovered here in the colonial downtown district,” he told First Coast News.

The skeleton was buried near the historical Spanish Dragoon Barracks, so it is likely the horse was a member of the late eighteenth-century Spanish cavalry. Dragoon regiments were established in most European armies during the late 17th and early 18th centuries.

Du to the skeleton’s size, archaeologists believe the horse was a rare Marsh Tacky. “There’s this subgroup of swamp ponies that are descendants of the original horses brought over from Spain,” explained Amanda LaPorta, a colonial cavalry expert, to Archaeology.

The Carolina Marsh Tacky or Marsh Tacky is a member of the Colonial Spanish group of horse breeds, which also include the Florida Cracker Horse and the Banker horse of North Carolina.

According to the Marsh Tacky Association, the horses stand 13.2 to 15 hands at the withers and weigh 700-900 pounds. They are traditionally hardy horses that performed a wide range of jobs from carrying children to and from school to plowing fields. The breed is remarkably good at endurance.  In fact, the Gaited Locomotive Research Program at Mississippi State University is currently studying the gait of the breed to get a better understanding as to why these horses can work or be ridden all day without the horse or rider tiring. Currently, there are less than 300 living Marsh Tackies and none living in the wild.

Archaeologist Halbirt believes this Marsh Tacky was a dragoon’s companion. “I think there’s reverence here. They actually laid it out on its side with the legs folded in the chest area. That’s a sign of reverence.”