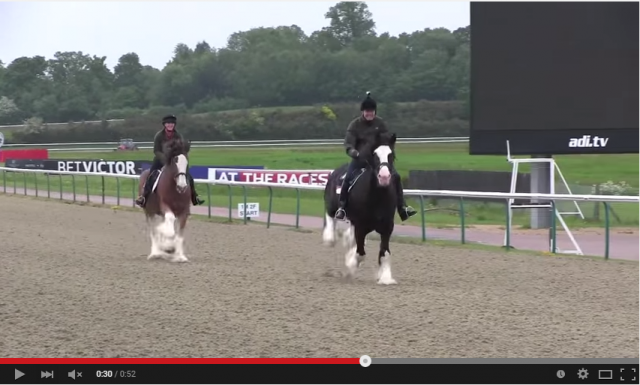 Because a healthy experimental spirit never hurt anyone.

Sometimes it really does seem like people in Europe have more fun. Case in point: In Lingfield, a village in England, last week, there was an inaugural “Battle of the Heavy Horses” — how fun does that sound?

One such event featured in this one of a kind battle was a race between two very large and in charge horses: a Shire and a Clydesdale. Who took home the honors? Our friends over at Horse & Hound have the video — find out for yourself:

The race lasted two furlongs, and it was the Shires who came out on top at the end of the day. Rightfully so, too, as this event was hosted in part to raise awareness for the Shire breed, which is actually endangered in Europe due to the lack of breeding mares.

Both the Shire and Clydesdale breed is on the Equine Watch List on the Rare Breeds Survival Trust, the Shire listed as “at risk” and the Clydesdale as “vulnerable”.

This week wasn’t the first time the Shire breed was put in the spotlight. Check out this all-Shire race from 2014, also held at Lingfield:

Watch out, American Pharoah — you may have some new competition these days!