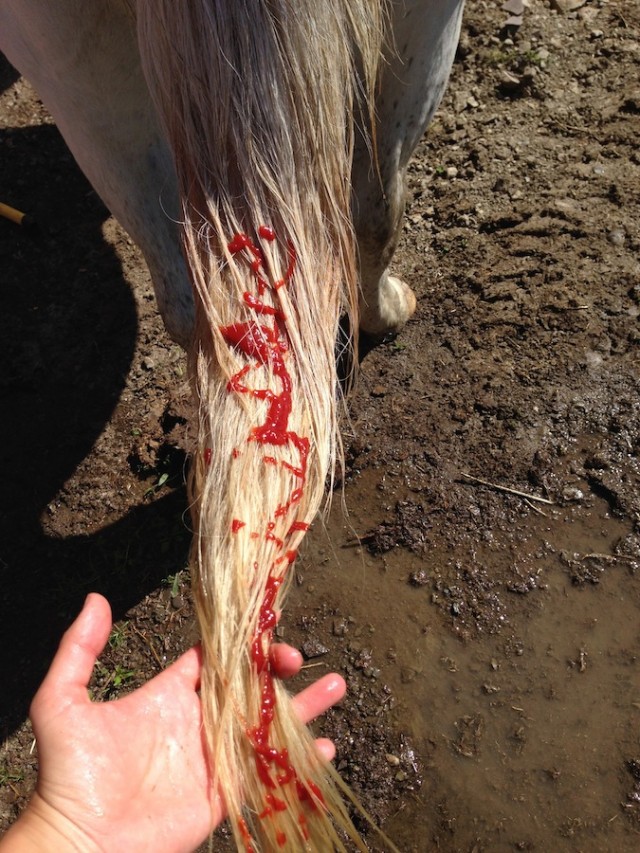 Is ketchup a miracle solution for cleaning white tails? We put it to the test.

A few weeks ago I started seeing an article circulating on Facebook from the Lusitano Portal, an online database for all things related to the Lusitano breed. The article was titled “Wash the white tail with … ketchup?” Since so many Lusitanos are gray, giving them thick, luscious white tails, I figured that these people were on to something. The photos looked pretty convincing:

The theory is pretty simple: scrub ketchup — just plain ol’ ketchup — into your horse’s tail, let it sit anywhere from fifteen to thirty minutes, rinse, and you’re done. Instant white tail. The testers who wrote the article mentioned that for the above-pictured horse, they did a pre-wash with regular shampoo. The other horse photographed was washed with ketchup only and the results did not appear quite as dramatic; however, the horse also had more black hair in his tail.

Reader Emma Jenne, at about the same time I first noticed the article, sent in the following photos and story: “I started by wetting his tail and putting a layer of shampoo and conditioner in it. Then I banded it and put a LOT of ketchup in it. It smelled terrible and I remember thinking that if it didn’t work, i would be real upset for all having to get ketchup all over me and him and having it not work. Like the article suggested, I let it sit for a good thirty minutes before washing it out. As I was washing it out, it didn’t seem to be working. This frustrated me, so I got shampoo and more ketchup and worked it into his tail. When everything was out of his tail, it looked exactly the same. Disgusted with the failure, I snapped a picture and took him down to wait until it dried. Luckily, when it dried, it looks a million times better! Lesson of the day- the tail always looks cleaner dry.”

Fascinated, we decided to give it a try ourselves.

What we found was that basically the ketchup will help whiten a tail (most likely because of the vinegar and citric acid) but it’s nothing at all miraculous or any more cost-effective than using a more conventional whitening shampoo (it took nearly an entire bottle of ketchup for one washing.)

In our first attempt we washed the tail with only ketchup which proved to be mostly just disgusting because, as you may know, ketchup isn’t soap. This meant that we had a lovely mixture of poop, general grime, and ketchup all over the pony’s tail. We let this concoction sit for fifteen minutes, during which time we amused ourselves feeding the pony the remaining ketchup because apparently she likes tomatoes.

After we rinsed the tail it was noticeably whiter but not impressively so. A follow up with real shampoo helped improve the smell but also revealed that the ketchup washing wasn’t anything special.

Luckily for science, my fiance’s horse is an aging gray with a fairly white tail. Originally, I planned to use JUST ketchup on the tail to truly test this magical solution:

As both Emma and Morgane had warned me, this process smelled terrible. Ketchup is fine when you’re putting it on a hamburger, but when you’re at the barn and smelling large quantities of it, it’s nauseating. As the Lusitano article had warned that flies combined with a ketchup-soaked tail could lead to interesting and messy problems, I had applied what I thought were ample amounts of fly spray — but Dutch was still streaked with pink lines that didn’t rinse out. He required a second shampooing to remove the ketchup stains from his coat.

After rinsing out the ketchup, I noticed a totally-unanticipated side effect: Dutch had tiny bits of tomato peel stuck in his tail! Perhaps this was because of the store-brand organic ketchup I was using, and not a problem I would have run into with a name brand … but either way, irritatingly, the tomato particles didn’t come out even with a careful combing.

See those tiny orange flecks? Those are bits of tomato.

Another unanticipated side effect: steers love the smell of ketchup as much as the flies do.

As Emma had observed above, the results aren’t impressive while the tail is still wet. I really, fully intended at this point to leave Dutch alone and let him dry … but the scent of ketchup was still heavy in the air even after a thorough rinsing, and I did not feel comfortable leaving poor Dutch with a fly-bait tail permanently attached to his rump. So out came the shampoo for a second scrubbing.

After this second washing dried fully, I took my comparison photo:

Looks impressive! But what the photo doesn’t show was the texture: rather than feeling clean, like a tail washed with just shampoo, Dutch’s tail had a weird brittle, slightly sticky feeling to the touch despite thorough rinsing, which I did not love. I’d much rather have a dirty tail that feels strong and supple than a clean tail that feels fragile (and still smells faintly of ketchup.)

As both Emma and Morgane stated in their own experiments, the tails aren’t show-ready, though they definitely look a lot cleaner. However, keep in mind that all three of us also used regular shampoo in addition to the ketchup for the above results — it’s hard to say without doing a second round of baths if we would have gotten the same results either with just ketchup or just shampoo. Even though some professional grooms mention the ketchup wash, it’s always in conjunction with other shampoos and products. If I were preparing my horse to show, I would probably skip the ketchup and invest my money in a commercial whitening shampoo — I’ve had good results with them in the past and a little bit goes a long way.

Ultimately, we’re calling the ketchup-white-tail-cleaner plausible … but it simply may not be worth your time.

Have you tried the ketchup cleaner method? Tell us your story in the comments below! If you have another barn myth you’d like us to test, email it to [email protected]!