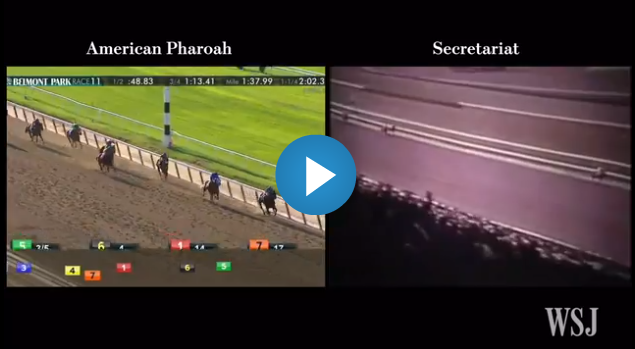 Could AP keep pace with Big Red? This side-by-side video comparison shows what such a race might look like.

Even before American Pharoah became the 12th horse to win the Triple Crown, the internet was comparing him to Secretariat (AP’s great-great-great-grandsire) and his historic Belmont win in 1973. They are both champions, but how do the two races really compare?

Even though AP had the second fastest Belmont Stakes time of all the previous Triple Crown winners, he was only the sixth fastest of Belmont winners overall and ran a fairly moderate pace for much of the race. And even though he ran the last 1/2 mile faster than the first 1/2 mile, his finishing time was more than 2.5 seconds slower than Secretariat.

All the same, it is pretty cool to watch the two superhorses race side-by-side in this split screen video posted by the Wall Street Journal. Complete with clocks and commentary from both races, you really get a sense of the intensity of the moment then as it is now.