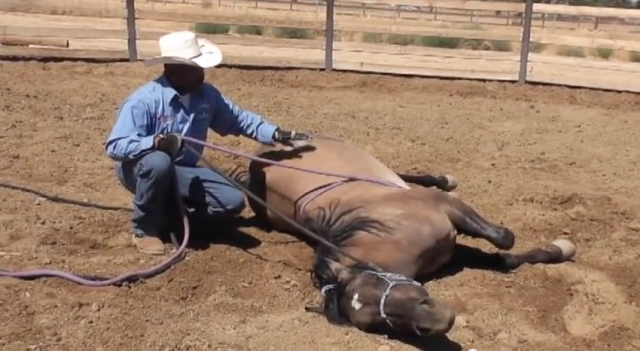 Valued training technique or cruel manipulation of a survival instinct?

A recent article on HN’s sister site, Eventing Nation, sparked my interest in an innovative technique for calming a horse – laying them down. I thought this might be the edge I needed to finally get my horse over his agoraphobia and immediately started research. What I found was a big ol’ controversy.

This side argues that laying a horse down builds trust between the horse and rider. It is often used for horses with extreme confidence issues. The method is valued by well known natural horsemanship clinicians such as “horse whisperer” Buck Brannaman and Guy McLean as well as Mustang Makeover participant/eventer Elisa Wallace.

The thing is, though, none of these people have videos of themselves laying a horse down and when asked how they perform the trick, their explanations are cryptic at best. One clinician said they used “pressure points and body manipulation.” The lack of full disclosure leads me to believe the method could be seen as traumatic … at least the first few times.

There are about a million videos on the Interwebz about laying a horse down, varying from rough-rider cowboy methods to clicker training to simple manipulation of a horse’s tendency to lie down and roll when led to soft sand. I thought this particular video showed a lot of horse sense and brutal honesty.

I also enjoyed this one that discusses teaching lying down in stages that start with bowing.

This camp maintains that laying a horse down doesn’t build trust — it simply shuts down the animal’s motor system. The argument is based on the theory of tonic immobility. Think about what happens when a lion takes down a gazelle in a wildlife documentary. The prey is running for its life, but as soon as the predator gets a single bite the prey rolls to the ground and lays frozen. To avoid gruesome images, I’ll show you this video of a diver inducing tonic immobility on sharks.

The horses in the videos do often appear to be in a trance-like state. Handlers usually talk to them, lay on them and pick up their legs. The question is … is that immobility truly constructive?

Where do you stand, Horse Nation? Are you for or against laying a horse down? Leave your comments in the discussion section below, or visit our forums, Equestrians Anonymous, to share your opinion!