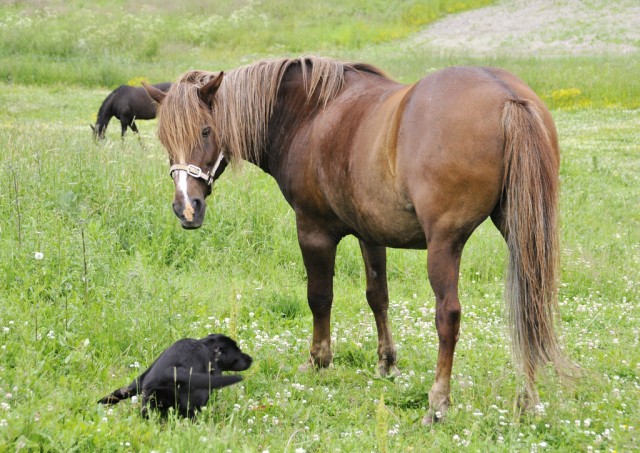 What happens if a dog comes after your horse in the pasture? Kjirsten Lee, J.D. offers advice from a legal perspective.

Dogs and horses go together like the Fourth of July and fireworks – usually a great combination, but sometimes not so much. Many barns have a resident greeter who comes to car doors, tail wagging and tongue lolling. These guys are often seen attached to the end of a lead rope at horse shows, standing at in-gates, walking cross-country courses, lounging in front of tack stalls. They are used to being around horses, and many of them love their bigger partners in crime.

But then there are the non-horsey dogs. A rider might encounter a loose dog while trail riding, or maybe the neighbor’s dogs run onto the horse owner’s property. Most of the time the encounter ends with all animals going their separate ways. Unfortunately, every so often one of the animals injures the other, leaving their owners to sort out who is at fault and who should pay for any veterinary bills.

When the horse is injured

Dogs bark. And like to chase things. Squirrels, balls, sticks … and horses.

Horses, as we all know, don’t like loud noises. And they run from things that scare them. Wheelbarrows, flapping plastic bags … and barking dogs.

Running horses sometimes injure themselves. They might step in a hole or, in some cases, run through a fence.

So if a dog chases a horse and the horse is injured, what next? In an Ohio case in 2002, the defendant dog owner tried to claim that she was protected by Ohio’s equine activity liability statute when her dogs chased the plaintiff’s horse while the plaintiff was riding, and the plaintiff fell as a result. The Ohio Court of Appeals disagreed, stating in an unpublished opinion that the statute did not protect the dog owner because the dog owner was not engaged in an equine activity. The court noted that some appropriate statutes would be those regarding confinement or restraint of dogs and liability of the dog owner for damages.

Some states have “strict liability” laws that say dog owners are liable when their dog injures someone, regardless of the surrounding circumstances. These laws are seen mostly in the context of dog bites. When a dog bites someone, in a state that has a strict liability dog bite law, the dog’s owner is responsible for any damages suffered by the person bitten – usually any hospital bills that result from treatment. (For a good, comprehensive article about dog bite laws, check out Detailed Discussion of Dog Bite Laws by Prof. David Favre at Michigan State University College of Law.)

Some states also have laws about dogs “running at large.” Such laws are aimed at dogs that are allowed to roam unleashed, which can pose a hazard to the community. However, these laws do not address what happens if dogs that are at large injure people or other animals or property.

When the dog is injured

As horse owners, most of us are concerned about our horses being bitten if they are chased. But what if your horse, in self-defense, kicks out and injures the dog? Or, let’s say you have a territorial horse and the dog runs into its pasture: reversed situation, the horse chases the dog, and either bites the dog or throws it over the fence. Just like the dog owner was liable for injuries to your horse, you can be liable for injuries to the dog.

There aren’t any laws that contemplate strict liability for injury caused by horses in the same way as the strict liability dog bite laws. The closest to having strict liability for injuries from horses are states like Connecticut, where the state supreme court in 2014 ruled that horse owners have a duty to take reasonable steps to prevent the horse from causing foreseeable injuries, because horses are naturally inclined to cause injury. However, an injured person still has to prove negligence in order to win in a case against a horse owner.

Even if the dog’s owner can prove negligence or fault on the horse owner’s part, there is still a question of what they can recover. As horse and dog owners, we value our animals as family members. The law sees them as property. Therefore, they are assigned an economic value and not a sentimental one. In a lawsuit, an animal owner might actually lose more than they gain by suing the responsible party. Costs of treatment and market or replacement value are generally available, but damages for sentimental value, emotional distress, and to punish the person responsible are much more difficult to come by.

The dog came onto MY property. Isn’t that trespassing?

Landowners have a right to defend themselves, their families and their livestock from animals on their property. However, a landowner cannot use deadly force to defend property – including livestock.

Trespass is covered under tort law. Trespass to land is what is known as an “intentional tort.” It is defined as “an intentional act that causes a physical invasion of the plaintiff’s land.” What does this mean? Well, essentially that the dog owner had to intend for their dog to trespass in order to be liable. Therefore, if a dog wanders onto land on its own, without the owner’s knowledge, the owner will not be liable for trespass AND will not be liable for any damage that the dog does while on the property. This general rule changes if the dog has violent propensities (if it is known to be violent) and injures someone on your land. Despite what the dog does, you still probably do not have the right to do anything more than call your neighbor or the authorities and get the dog off your land.

What to do if your horse is injured by a dog

First, call your veterinarian (if necessary.) The sooner you can get your horse treated the better. Then, your best option is to get the dog off your property by calling its owners or the authorities. If this is a recurring problem, consider installing some sort of electric fence and keep calling your local animal control office.

Remember that this is intended to be a general overview. The applicable laws and regulations in your state and city might be different from what was discussed here. If you have specific questions and concerns, contact an equine lawyer!

Kjirsten Lee, J.D., is an attorney in Memphis, TN. She has written on topics such as the Horse Protection Act and use of drugs in racehorses. Kjirsten and her OTTB, Gobain, compete in dressage and eventing.