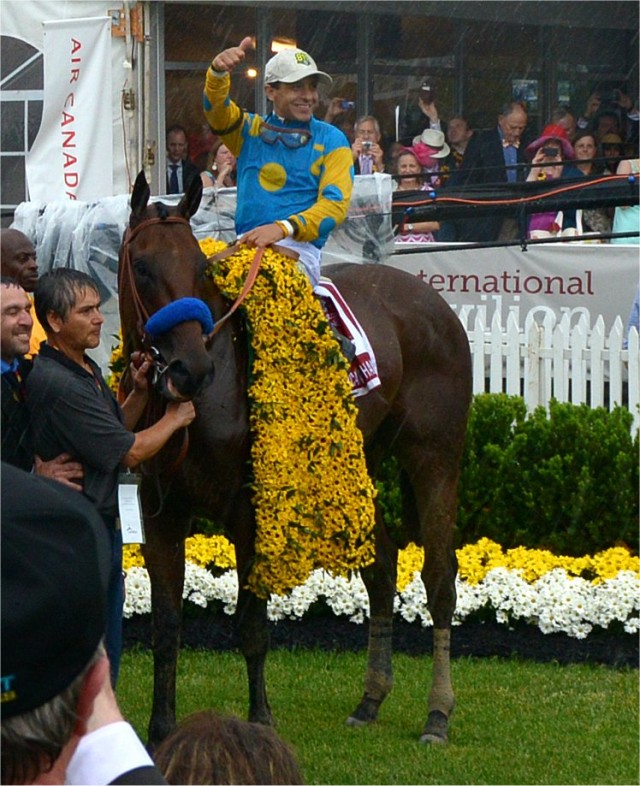 Tonight will be the moment of truth.

I probably wouldn’t believe you if you told me you were rooting against American Pharoah this weekend (unless you happen to be closely tied to the camp of another entrant, in which case you can have a pass). Love racing or hate it, each year there is a Triple Crown hopeful, no matter how distant that hope may be, the tantalizing promise of witnessing one of the greatest moments in sporting history still dances before our eyes.

We’ve been let down a lot. I think the one that stands out most in my mind is Real Quiet — I think I’d rather lose by 18 lengths than a nose, but that’s just me.

Just watch that and try not to cry. Let’s bring another point up: Real Quiet was a Bob Baffert trained horse as well. That Belmont, in 1998, was the closest any horse has come in recent memory to winning the whole thing, and he fittingly lost it to a horse named Victory Gallop.

Poor Bob Baffert, man. The guy is so good at what he does, yet he just hasn’t achieved what each and every trainer out there is striving for daily. Bob Baffert has trained Silver Charm (1997), Real Quiet (1998), War Emblem (2002), and now American Pharoah to win the first two legs of the coveted Triple Crown.

It’s so easy to get your hopes up. Each year, I almost look forward to the Preakness more than the Derby because I want to know if we’ll have a potential Triple Crown champion on our hands. It just creates a buzz that brings to mind the “golden days” of Seabiscuit and Secretariat, when the big races were all anyone could talk about.

I crossed my fingers and toes last year that California Chrome would pull off the big win. But then his owner went on that infamous rant after losing, and I had a sour taste in my mouth. Chrome still has a large following, but it isn’t quite the fervor that surrounded him while he was on the trail. And it’s not his fault. He’s off racing in Europe now, and I’m glad to see that he wasn’t shipped straight off to the breeding farm.

That aside, this year just feels different somehow. Maybe it’s because Pharoah looks like a champion. Not that his previous counterparts did not, but he just oozes class. The horse is a champion, and he knows it.

A sad fact of the racing industry is that the cream of the crop garner all of the media attention, while in the background many horses are toiling away with no hope or shot at glory. People work hard for their passion, whether it be breeding, riding, training, or owning Thoroughbreds. Most of those people will never get a second glance, but they keep waking up at 4 a.m. each morning to go to work.

The American Thoroughbred is a symbol of the American Dream. Beauty, success, fame, riches — all brought about by talent and hard work. A Triple Crown winner would boost the racing industry, and while there is plenty of money to be handed out at the top of the ladder, perhaps a big win would give everyone, even the struggling exercise rider, that extra push of motivation to continue pursuing their dream.

Maybe I’m looking at this through rose-colored glasses, but American Pharoah has made a lot of friends this year. Saturday’s race will be a huge test, and my hope is that no matter what happens he still goes down in the history books as an out and out champion. The world needs more of those — isn’t that the truth?