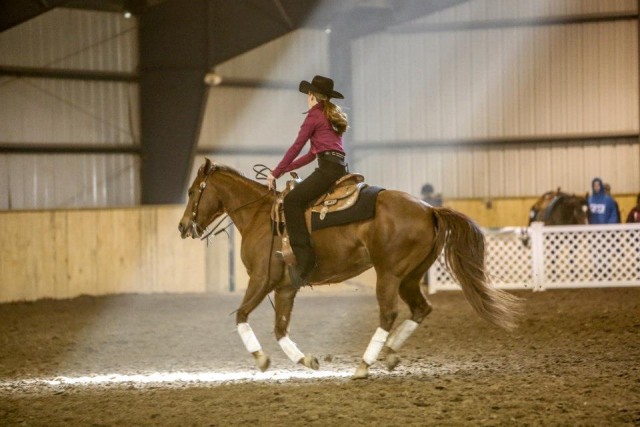 Introducing a new column by student-equestrian Haley Ruffner! Today, she shares how she came to love the sport of reining.

At the Interscholastic Equestrian Association (IEA) Zone 2 Finals, I came to a startling realization: without me really noticing, I’ve come to love reining above all other disciplines.

I had finished my reining class and qualified for National Finals, and I was excited about that — until I realized that I had to show horsemanship next.

That meant putting my hair into a neat bun under my hat, which requires an almost-surgical operation since I have enough hair for at least three normal-sized buns, and usually ends with me riding into the show pen with a clump of hair at the base of my neck that vaguely resembles a pincushion with all the bobby pins in it.

That meant I had to look nice, have my shirt tucked in perfectly and hold my hands and my legs and my upper body and shoulders just so, and go around in slow circles with my nose in the air. I had to wear the dreaded waist-high showmanship pants, a horror made even worse by the eighty-plus degree weather, which had the unfortunate effect of making me feel like I didn’t have legs at all, just sausages encased in black shrink wrap attached to my hips.

This was in stark contrast to the relative casualness of my previous reining class: first and foremost, I could wear jeans (JEANS!) and a ponytail (a construction that required one hair tie and approximately ten seconds to accomplish.) I mounted the horse I had drawn, a steady old palomino called Goldfish, and promptly settled into the “reiner slouch”–sitting deep on my pockets and rather hunched over. My posture did not have to have any aesthetic qualities whatsoever, it just had to be effective.

When I first started taking reining lessons, the “reiner slouch” was an entirely alien concept, and it took me over a year to get the hang of it. Learning how to sit sliding stops was one of the maneuvers I struggled with the most, and resulted in a few too many stops that threw me embarrassingly far out of the saddle. However, once I figured out how much easier it was to sit a stop — any stop, sliding or otherwise — with “ugly” reiner posture, I started to unconsciously sit that way for every stop (which, you know, works fine if you only ride reiners, but is generally frowned upon when you stop a hunt seat horse like that during a lesson. Oops.)

Besides the physical comforts of reining, it is, in my opinion, also infinitely more fun than railwork. The first time I spun a horse, it was an absolutely thrilling experience, and even now it’s still exhilarating. Running big fast circles on a well-broke reiner is a feeling like no other, and having a perfect transition down to a small slow circle with just seat and leg cues never fails to amaze me. Like horsemanship, it requires a great deal of precision, but it’s a fast-paced accuracy that leaves me out of breath and grinning as opposed to the nervous composure prompted by horsemanship.

In my experience, horsemanship and reining are comparable to crocheting and waterskiing, respectively: they both require skill and time to master, and one can be proud of accomplishments in both, but in the end, the latter will always inspire a stronger reaction.