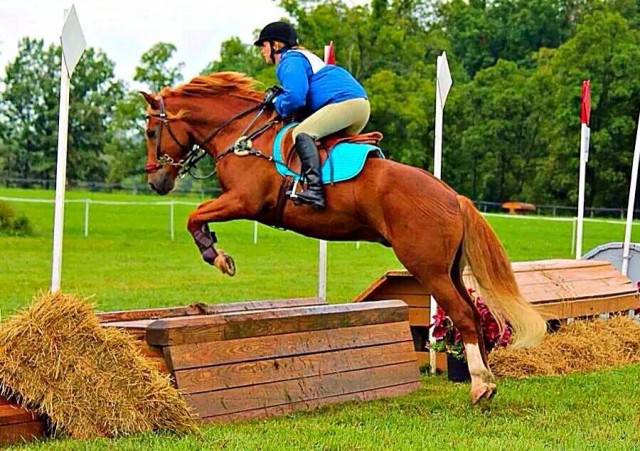 Each Friday, Horse Nation teams up with Ovation Riding to spotlight an individual or organization that is doing good work in the horse world. This week, we salute Eden Rice of Eden’s Equiwear.

Eden and Chance in a Daniel Stewart clinic. Photo by Gia Venuto.

Sometimes the idea of “paying it forward” combines with “giving back:” in such instances, it’s hard to find a beginning and an end of generosity. Eden Rice and “Eden’s Equiwear” are part of such a chain, inspired by the generosity she was shown at a young age to turn her talents into her own gesture of giving. In the words of Eden’s mother Amy, “it’s a bit of a long story, but I love the people we’ve met along the way.”

In 2008, a young Eden (riding borrowed horses to participate in Pony Club) read about a charity called the Feather Fund: the organization helps deserving young horsemen and horsewomen purchase a foal from the annual July Chincoteague pony round-up and auction. Fund recipients must fill out an application, including proof of adequate facilities, equestrian background and evidence of money saved already towards the auction price of a pony.

Amy, not believing that ten-year-old Eden would actually win such funding, gave her daughter the go-ahead to apply … and in the way that these things have of working out, received notice in 2009 from Feather Fund coordinator Lois Szymanski that she had been selected as a recipient. With money Eden saved from selling the eggs of her chickens, the family headed to Chincoteague to meet the Feather Fund “family” and purchase a pony foal.

Tragically, a few years later, Eden’s now-grown colt colicked and died — a crushing blow to any horse owner, but especially to young Eden. Lois Szymanski’s daughter Shannon Meyers, hearing about the pony’s passing, loaned her own pony gelding Chance to Eden, along with another pony, the famous Seafeather. After Eden and Chance clearly developed a bond and a great partnership, Shannon made it official and Eden became the gelding’s new owner.

Inspired by the generosity of so many others who made it possible for her to fulfill a dream, Eden decided it was high time to give something back while also paying forward: using her artistic talents, she designed a shirt featuring the famous stallion Surfer Dude (Chance’s sire) and put the shirts online to sell. 100% of the money made from selling shirts will be donated back to the Feather Fund as well as the Chincoteague Pony Rescue: this combination of charities will both allow more children to experience the joy of owning a pony as well as help save ponies who have fallen on hard times.

It’s not every day that we hear about a young person so creatively finding ways to return a gracious gesture. Amy and Eden have adopted the Feather Fund motto “giving back to others” as their own, and through Eden’s Equiwear are upholding those words to the fullest.

Check out Eden’s Equiwear on Teespring to purchase a shirt while making a donation. Orders will only be open until June 16!