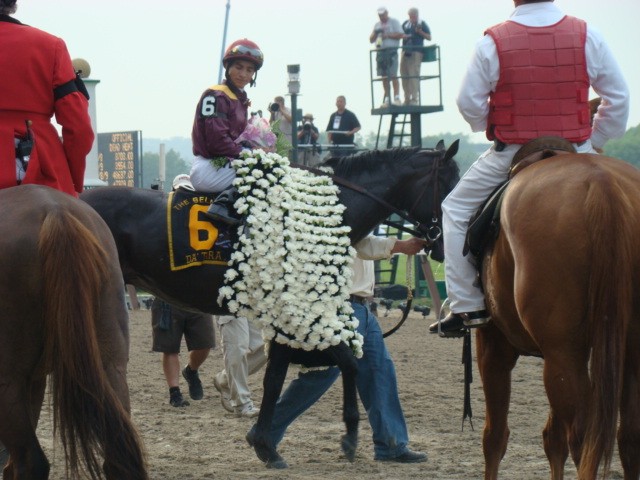 Not unlike the Kentucky Derby and the Preakness, the Belmont Stakes has its own unique character.

The Belmont Stakes is traditionally called “The Test of The Champion” or “Run for the Carnations” because the winning horse is blanketed with white carnations:

But that’s about the only part of the race that’s stayed consistent, other than the massive Belmont Cup: the winning owner is ceremonially presented with the silver winner’s trophy, designed by Paulding Farnham for Tiffany and Co. It was first presented to August Belmont, Jr. in 1896 and donated by the Belmont family for annual presentation in 1926.

Despite the fact that the Belmont Stakes is the oldest of the Triple Crown races, its traditions have been more subject to change. Through 1996, the post-parade song was “Sidewalks of New York”. From 1997 to 2009, the audience was invited to sing the “Theme from New York, New York” following the call to the post, in an effort to appeal to younger fans. In 2010, the song was changed to a solo version of Jay-Z’s “Empire State of Mind” before reverting back to “Theme from New York, New York” for 2011 through the present. This tradition is similar to the singing of the state song at the post parades of the first two Triple Crown races: “My Old Kentucky Home” at the Kentucky Derby and “Maryland, My Maryland” at the Preakness Stakes.

During this period of musical transition, the official drink was also changed, from the “White Carnation” to the “Belmont Breeze” in 1997. The New York Times reviewed both cocktails unfavorably, calling the Belmont Breeze “a significant improvement over the nigh undrinkable White Carnation” despite the fact that it “tastes like a refined trashcan punch.” In 2012, the official drink was changed once again to the “Belmont Jewel.” In the spirit of our long-standing Horse Nation tradition to keep you “well-hydrated” on raceday, here’s a recipe from the Belmont website:

Despite the evolution of tradition, the Belmont Stakes still remains the toughest leg of the Triple Crown and lives up to its name as “The Test of the Champion.” We’ll continue to bring you Belmont coverage throughout the weekend!