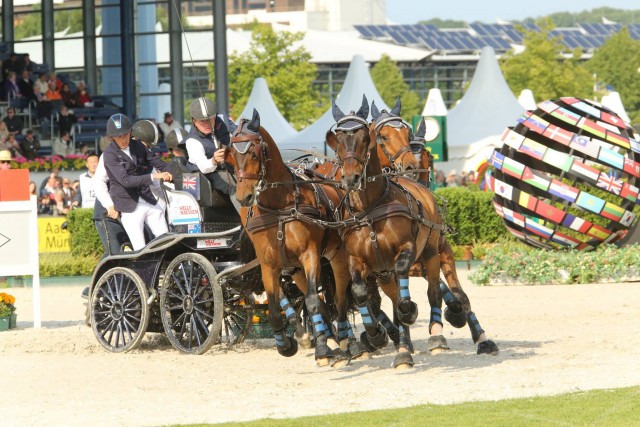 Two of our favorite equestrians won the ultimate relay race in Aachen last week — check out the replay!

Aachen hosted the World Equestrian Festival on May 29-31, welcoming the trifecta of jumping, driving and dressage to the massive outdoor arena for top-notch competition. One of the most popular events remained the jump-and-drive, in which a show jumper tackled a speed-round course, then jumped off of his horse to hang on for dear life on a carriage as his driver-partner whipped through an obstacle course.

The dream team of Ireland’s Bertram Allen and Australia’s Boyd Exell brought home the victory in a thrilling round that had the crowd clapping along in excitement: (must be logged in to Facebook to view.)

Jump and Drive in Aachen

According to a press release published on Hoefnet, it sounds as though there wasn’t a lot of practice that went into Allen and Exell’s winning time, just some planning (so deepest respect for Allen, who was pretty much along for the ride with a world champion indoor team.) Other highlights from the jump-and-drive included jumper Constant van Paesschen falling and sliding upon his dismount, and jumper Marlon Modolo Zanotelli’s horse leaping right out of the arena as Zanotelli was sprinting to jump on the back of Chester Weber’s carriage. (Whoops.)