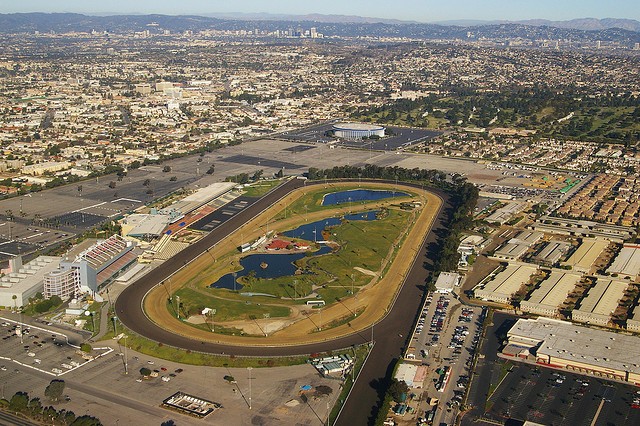 The grandstands were imploded on Sunday.

The site of some of thoroughbred racing’s greatest moments is no more as of Sunday morning, May 31. Crews imploded the iconic mid-century grandstands in dramatic fashion using a series of explosive devices that collapsed the roof and seating in less than 20 seconds.

First built in 1938 (and rebuilt in 1949 following a devastating fire), Hollywood Park was the backdrop to a number of extraordinary events in racing history, including playing host to the inaugural Breeder’s Cup in 1984, and twice more in the decades to come. The three Breeders Cup Classic winners at Hollywood Park were Wild Again and Pat Day in 1984,  Ferdinand and Bill Shoemaker in 1987, and Skip Away and Mike Smith in 1997.

It was also the site of one of racing’s greatest moments in 1951, when Citation became the first Million-Dollar-Winning Horse when he won the Hollywood Gold Cup in extraordinary fashion by four  lengths. It would be Citation’s final race before retiring to stud.

(You can hear audio of the race call as well as the backstory of the occasion here.)

Citation winning the Hollywood Gold Cup in 1951 by four lengths.

In more recent years, amidst declining attendance and contentious development efforts in the Hollywood Park neighborhood, the Inglewood track suddenly experienced a remarkable renaissance in what would turn out to be the final glory days, made possible by the huge hypnotic heroine, Zenyatta. The charismatic mare, owned by Jerry and Ann Moss, was based out of Hollywood Park, and her workouts and race appearances there made for record attendance. Fans lined the fences for a chance to glimpse the then undefeated dancer as she made her way about the park, and commemorative t-shirts, horse bobbleheads, and “Zenyatta Days” brought the park to life again for a brief golden moment.

Zenyatta wins the Vanity Invitational at Hollywood Park in 2010 by a nose. Brianna Privett/Flickr CC

Despite the attendance and betting spikes in Zenyatta’s heyday, too many more valuable offers existed for re-purposing the expansive acreage, and the track property was sold and closed its doors in December 2013. The park’s historic parts and pieces were auctioned off prior to demolition, and the ground is now being cleared to make way for the likely return of the NFL franchise, the St. Louis Rams (which were previously the Los Angeles Rams).

Many of the named and sponsored stakes races, as well as the training operations that were based out of Hollywood Park, have been relocated to the tracks at Santa Anita and Del Mar.