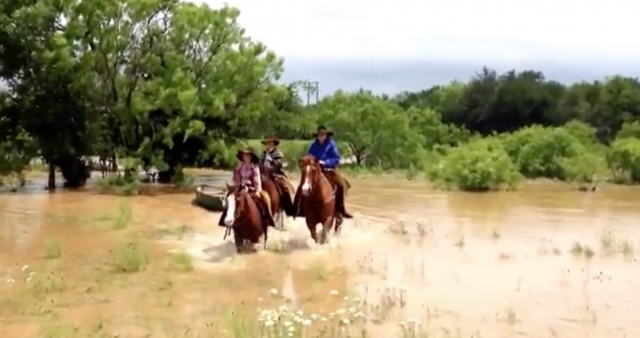 To put it mildly, it’s been bonkers in the Lone Star State.

My home state has just endured one of its wettest months on record. Here’s some interesting tidbits from NBC News.

Animals have certainly not been excluded from the mayhem. Five hundred cattle were rescued from the Trinity River, according to KHOU, when Pat Hency’s 1800 acre ranch was reduced to just 50 useable acres. In an effort to save as many cattle as possible, airboats, helicopters and horseback riders were called to the scene. After hours of walking and swimming, the cattle made it to CMC Rail Yard where they will remain until floodwaters recede.

Youtube made internet sensations of Cross B Rodeo Company and Boys Ranch who went searching for 31 missing ponies and horses after a flash flood in Eastland, Texas. “Bailey (14), Jade (12), and Trace Barrett (8), helped their dad (Will Barrett) by riding hours through the flooded ranch searching for the ponies and horses. Eventually, they gathered, roped and rescued all 31 head from the raging flood waters. The horses and ponies were herded back across the strong flowing flooded river and then herded across the flooded ranch and into a set of livestock pens on high ground. By the time the cowboys had located and gathered all of them some of the smaller ponies had been washed down River over the tops of the flooded fences. Thankfully, with the use of their saddle horses, ropes and even their mom (Pepper Barrett) and their 6 year old little sister Pixie, all horses and ponies were successfully rescued.”

Finally, there is a plea for help from several horse rescues across the state. Here’s the story of Del City Horse Rescue: “Their has been incredible damage done to our horse rescue. The damage has shrunk the amount of land the horses can use by over 1/3 of the original size. We are needing any  donations that can be made to pay for a substantial amount of dirt and a tractor and/or bulldozer to spread and grade the area. We appreciate any contributions that could be made!” If you’d like to help, check out Del City Horse Rescue’s GoFundMe page.

I think I speak for all of Texas when I say, “I’m so freakin’ excited the sun came back on June 1st.”  It’s been a rough month and Horse Nation’s prayers are with all the families affected.

Correction: It has come to our attention that the horse rescue listed above is actually in Oklahoma. Del City – one l – is in Oklahoma. Dell City – two l’s – is in Texas. We apologize for the confusion. I meant no offense. The state of Oklahoma definitely knows how to ‘cowboy up’ as well as Texas. Although if we start talking Longhorns versus Sooners…