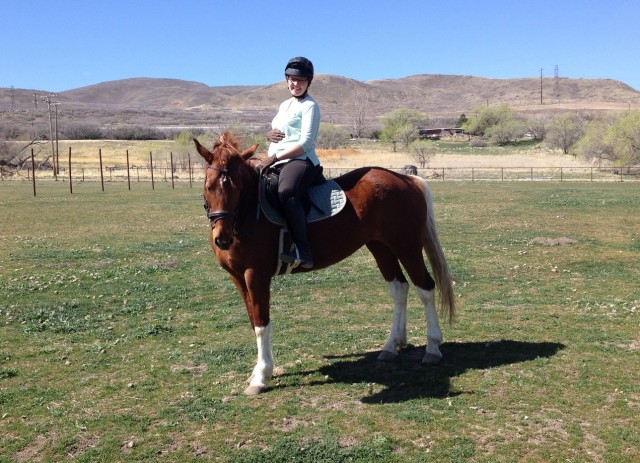 Introducing a new series from longtime contributor Lorraine Jackson as she navigates pending motherhood and a committed horse life.

Maybe this sounds like a terrible thing to say, or a bad omen, or perhaps I’m not alone in the Universe (I guess I’ll find out after this goes out into the digital ether!), but if it weren’t for my adoring, doting husband who knew so fervently all his life that he wanted to be a dad, I probably would have been satisfied thinking of my horses as “my kids.” That especially resonated in the early stages of pregnancy, when I spent several weeks nursing ginger-ales, saltines, and praying for the room to stop spinning.

Ultimately, that’s what this whole experience – me sharing my first pregnancy with Horse Nation – is all about. It’s about the multiplicity of choices we face as men and women in a demanding sport/hobby/profession/lifestyle, and what choices we each get to make. It’s not about right and wrong … it’s about making the choice that’s right for you, your horses, and your family, whatever size and composition that may be.

For me, that first obvious choice was the hardest. Are we really doing this thing? My husband and I have been married several years, we both have stable careers, we own our tiny ancient house with a fence and a dog. All we needed was for my heart to want this. And for a long time, that just didn’t come. It was hard for me to want something so life-changing when the childless horse life that I had felt so full. To the outside world maybe these things sound crazy, but in the hallowed virtual halls of HN readership, I feel safe saying that I was genuinely worried about what would happen to my very expensive, very demanding, but absolutely joyous horse life in the throes of pregnancy and motherhood.

I heard that having kids is kind of like this, you see.

If the budget gets tight between diapers and daycare, are horses the first thing on the chopping block? Can we make time as a family for me to continue fulfilling my obligations to the living creatures who already depend on me? Would I allow myself to walk away from my life’s passion if someday it just feels too hard to do it all? These were emotional, sensitive questions to navigate, but I’m very lucky to be in a marriage where my spouse and I could talk openly, and where my horse life felt respected. My Mr. is not a horseman, but he’s a man of many passions, and for us, that understanding made all the difference. With the promise that we can and will make this work, I took the leap of faith necessary to do something as crazy and permanent as spawning.

Since we had established the “if,” the next part was “when.” I wanted it to make sense in my horse calendar, both immediately and long term. At the time we were thinking of starting this whole thing, my adopted mustang mare, Itxa, was four years old, and just starting to come around to the daily routine of life under saddle as an eventing prospect. There had been months of growing pains on the flat, and now we were JUST creeping into the territory of crossrails and low-level gymnastics, and I was tapping into a horse who finally seemed to like her job. Knowing that I was signing up for inevitable time off was excruciating.

How many months, realistically, would I be out? When would I stop feeling comfortable (mentally and physically) with continuing to condition, train, or jump? Who would keep Itxa going while I was out of the tack? What would my trainer say? Ultimately, I tried to console myself with the notion we could just plan this whole thing around the Utah weather. I was going to attempt to make my pregnancy coincide with the winter off-season as much as possible. I mean, if it works for William Fox-Pitt and Chilli Morning, it can work for me, right?

Funny story, though. It turns out that despite everything I thought I knew from “16 and Pregnant”, you don’t actually get to just decide to be pregnant, and then boom, you’re pregnant. So instead of being magically pregnant in July, riding until December, having a baby in March, and being back in time for the first recognized show in May (wow, that would have been awesome,) I’m actually due in July. Oops.

Ultimately, there will – and already have been – sacrifices of time and money to my horse life in order to have a family. The 2015 show season is a bust. My mare and I have experienced a slew of twists and turns navigating a three-way relationship since I learned I was pregnant in November. The body I have right now is not the athlete I was in October. But I have a sense of peace that it will all be worth it, and that the future will be one that’s good for every member of our menagerie.

The Upside of Missing ‘White Breeches’ Season to Spawn

I’m excited to share this chapter of my life with the readers of Horse Nation, and look forward to hearing and sharing in your experiences, too. I welcome advice and anecdotes, and I virtually high-five your choices and your stories, whatever they may be!

Go Riding. (In my honor, since I can’t.)
Lorraine has been a regular contributor to Horse Nation since its inception in 2012. Her non-horsey but seriously awesome husband Dan, her 5-year-old BLM mare Itxa, Australian Shepherd Rev, and stupid cat Jeoffrey live in the beautiful Rocky Mountains of Utah. They are stoked to invite another human into the Zoo in July, 2015. Also, because she gets this a lot, her horse’s name is pronounced EEE-chah, and yes, horse show announcers and organizers can and should hate her for her horse-naming hubris.