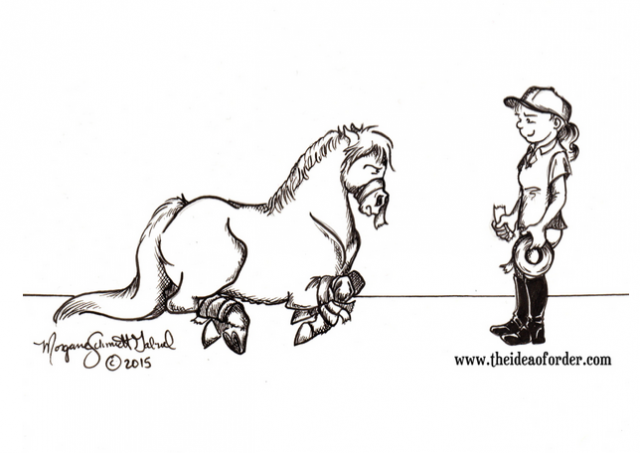 There’s been a lot of buzz about the “duct tape twitch” recently … does it work? Horse Nation puts it to the test.

By now, you’ve probably seen the videos, photos and claims circulating the internet about the amazing duct tape twitch: not a true twitch, this method calls for a piece of duct tape to be applied to the horse’s nose for an instant calming effect. The most dramatic (and probably most shared) example is this farrier trying to shoe a nervous horse that doesn’t want to stand, and looks to be close to escalating this situation to dangerous levels … until the tape is applied.

Based on this video alone, I’d be drinking the Kool-Aid. This horse goes from nervous and dangerous to tractable and quiet in a matter of seconds. Even better, nobody has to raise their voice or their hand to get the horse to behave. The farrier himself is floored that it works as well as it does.

There are countless other videos out there on the YouTube-verse of various duct tape applications, most of which appear to be highly successful. One thing I noticed, however, is that no one seems to be placing the tape in exactly the same location, which makes me wonder how this is really working. The above video shows the tape placed up on the end of the nose bone with a few inches left to hang free; other videos show the tape stuck down between the nostrils, often with the horse wiggling his nose wondering what’s stuck there.

Another funny thing I noticed while browsing these YouTube videos was that any time someone posted a video with the tape stuck down low on the nose and the horse clearly hated what was going on and tried his best to remove it, someone would comment stating that the handler had applied the tape incorrectly. Oddly enough, if the tape was applied “incorrectly” but the horse was standing quietly, no one called them out on their tape placement. This observation further muddied the waters for me — what was correct? What was actually going to work?

Morgane Schmidt’s Idea of Order comic from May 27th illustrated a hilarious take on the duct tape twitch, and also spawned some good discussion on Horse Nation’s Facebook page. Her comic description also included a link to a video of my first attempt at the duct tape twitch (see the comment section where a viewer points out my incorrect application). Wanting to do justice to science, I decided to give it another go, and Morgane was game to attempt application on one of her horses as well. Here are our results:

The first time we did it (and of course weren’t filming) he totally went bonkers and then when we pulled it off he nearly jumped out of the stall. I think it waxed his fuzzy lip. Here’s a video of the second attempt:

The nice thing about my first video was that someone else was filming, so I had both hands available to be applying tape. This time, I was alone in the barn, which meant one hand was occupied by videoing. Hence, there are some awkward moments in all of my videos where I need to use half of my camera-holding hand to try to hold the horse still so I could apply duct tape … apologies in advance for those moments. (Also, I keep calling it the “duct tape challenge” … I have no idea why.)

Red was my test subject for my first and “incorrect” application, but for my second attempt I did manage to get the tape applied further up on his nose bone, and for a few seconds it seems to be working — certainly much better than my first attempt.

In the spirit of scientific discovery, I tried the tape twitch on my other two horses as well: Skip is normally our most steady-eddy guy in the barn, while standing for the farrier, and while under saddle. However, he did not enjoy me coming at him with a piece of tape, and in our resulting minor struggle I wound up sticking it way far down on his muzzle. (However, there are videos of other horses tolerating this placement, so it may not be entirely in where the tape is stuck.) After Skip briefly lost his mind and then ditched the tape, I tried to re-apply it further up his face but the tape no longer stuck.

I will confess that I had really high hopes for this working on Dutch: he constantly is sticking his nose in places where it doesn’t belong, and the concept of standing quietly in the barn is totally lost on him. (Oddly, though, he’s solid as a rock for the farrier.) I achieved higher placement on this horse, thanks in part to his big ol’ Roman nose, but sadly it did not cure him of his need to constantly be shifting around and dragging me out the door.

While she was unable to get video, Leslie Threlkeld also gave this an attempt and reported back: “I tried this with a horse that dances in the wash rack. She hated it. She was furious actually and just tossed her head until I took it off. She wasn’t dancing though…”

Like just about anything else in the horse world, the duct tape twitch works for some horses and doesn’t work for others. While we didn’t have overwhelming success, the video evidence and testimony from other horsepeople shows that it does work on certain animals. (And yes, it may depend on the placement for each individual horse too — videos show horses standing quietly with the tape placed in every configuration we attempted, and more.) If it works for your horse to help him stand quietly, then by all means, continue.

Various professional horsemen have written blogs and published their own videos trying to explain why it works, with most agreeing that successful tape twitchers are the kind of horse that can be distracted: the tape gives them something else to focus on rather than the farrier or vet or clippers. Leslie asked her farrier for her opinion: “She said she had the duct tape trick work great on one horse and not at all on another, and mentioned the reason why the horse was being bad made a difference — if it was distracted vs nervous.”

It’s important to note that the tape twitch should not be viewed as a cure-all for bad behavior of any kind, but just one of a myriad of training aids that can be employed to help reach a final goal.

Myth or truth, ultimately, we have to agree with the farrier in the video below, who has mastered the use of duct tape while shoeing:

Have any other “equine myths” you want to see us prove or disprove next? Email them to [email protected]