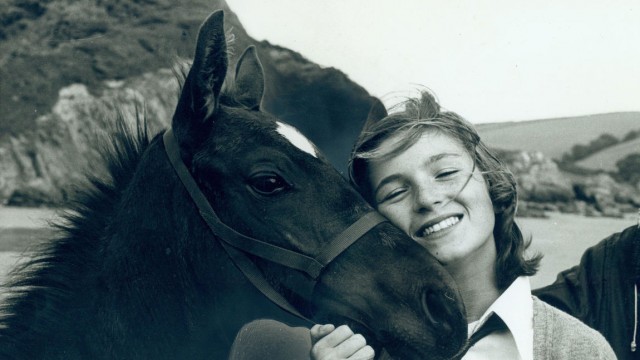 For her role as aspiring Olympic eventer Sarah Brown, actress Tatum O’Neal embarked upon an accelerated riding program that had her jumping 3’6″ courses in less than two months. She discusses the experience.

This movie gave most eventers “the bug.”

How much do we all love International Velvet? Let us count the ways. If you haven’t seen this sequel to National Velvet, definitely add this movie to your must-watch list. (Check out a trailer here.)

For those of us who event, I think I’m not alone when I say this movie gave me much of the “bug” that most of us blame on our current state of addiction.

If you’ve ever been curious about the behind the scenes action on the set of International Velvet, this great documentary will give you everything you’ve been wanting.

“The film spans seven years, and it’s that transition period in the film of the young child to the young adult,” director Bryan Forbes says of Tatum O’Neal’s acting. It truly is fascinating to watch this young girl grow up before our eyes, and her story is nothing short of inspiring.

No matter what your discipline of choice is — this documentary will fascinate you. We get a glimpse of Tatum’s training she underwent in preparation for the role, training with the likes of Marcia Williams and Bill Steinkraus to build her up to the point where she could ride authentically on film.

It’s really cool to see some appearances from equestrian greats of years past, who all had a role in making this fan favorite film. It’s for good reason that we love this film! Authenticity at its best and the ever consuming goal of achieving greatness at the forefront of its plot. What more could a horse person ask for?