Amanda gives us a mid-term update from polo school.

It’s been almost a month since I last updated you, because time flies when you’re having fun. It’s difficult to express how much I’m enjoying this new challenge. So many equestrian sports are spent “training against yourself,” while polo, to a certain extent, is about letting go of all those neuroses. There is a camaraderie with your team and a massive thrill from hitting the ball towards the goal. As a person who has never played team sports … it’s kind of addicting!

But let’s get to what I’ve learned, which is line, man, ball.

Those three words have been nailed into my subconscious, just under “heels down” and “eyes up.” Here’s the theory as described by the Red Book of Polo….

“A player must learn NOT TO CHASE THE BALL in polo. The first rule in every player’s mind must be to JOIN THE LINE. After you join the line (on offside or nearside), then the player looks to take a man. After you join the line and engage a man, then you can attempt to hit the ball. It must be in the players mind at all times to think – LINE-MAN-BALL. This is the most important rule of polo.”

For a more in-depth look at the “line of the ball,” check out these drills by my instructor Mark Prinsloo at the 2012 Instructor’s Forum.

Unfortunately, what seems easy to understand on paper gets a lot more complicated on the field. The best way I can describe it is by saying, I go a little crazy. The first few weeks were hard, you guys. I couldn’t get the positioning right and when I did I barely tapped the ball. Now I can actually hit the thing and that’s all I want to do. The first few times we played in a group, I probably committed 5 fouls in less than 5 minutes. So now I have to constantly remind myself LINE, MAN … then in a very distant third … BALL. Here are a few images from last Saturday’s training session. 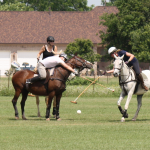 I’m going for it. 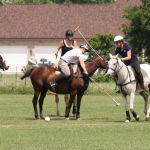 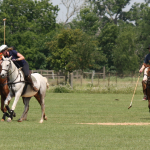 An instructor cracked a smile! Yeeesss! 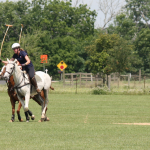 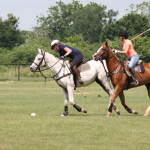 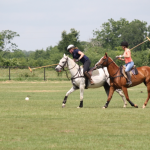 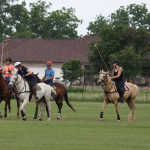 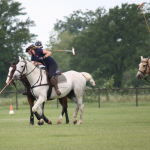 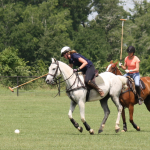 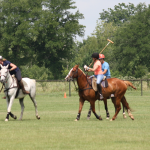 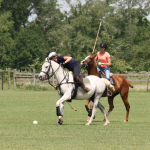 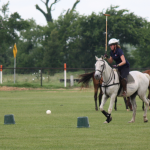 Now let’s talk nearside shots, which are crazy difficult. If you are wondering why, check out this video about body positioning.

Imagine playing Twister on the roof of a car going 20 mph while staying steady enough to hand a glass of unspilled water through the driver’s side window. That’s basically a nearside shot. They are hard and, well, a work in progress for me.

Along with training at the Houston Polo Club twice a week, I’ve been working to improve my fitness at home. I’ve been riding my horses with mallet in hand, just to get used to the weight, and practicing a few drills with the help of my Quarter Horse, Aggie. I’ve also been performing exercises to strengthen my right arm and grip.

That’s it for this update! Next time we’ll discuss hooking and hopefully I’ll have a few helmet cam videos. Stay tuned!

For tons of great videos check out PoloSkilz. Note: There is a login, but it is not a registration. I have never received any “push notifications” or spam emails.