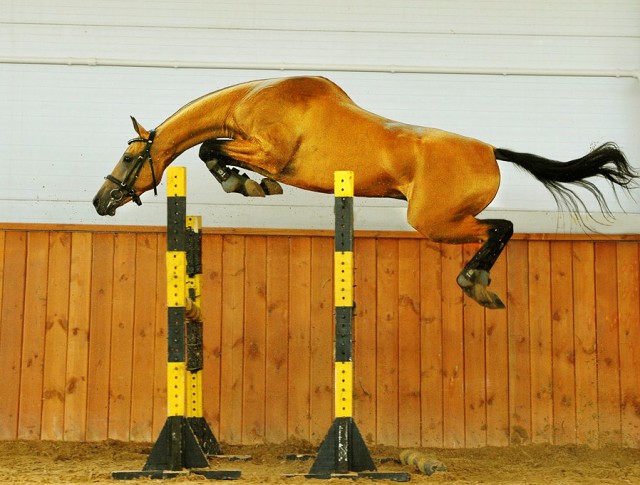 Stallion inspections have been respected as the ultimate standard for sporthorse breeding for hundreds of years. But how does the process work?

Having never attended a stallion inspection and having very little idea of what goes on at such an event other than what I could glean from photographs in magazines, I held the following assumptions to be true: warmblood stallions (and mares and foals) had to be inspected in order to become registered, and stallions were also judged and graded based on other criteria in order to be listed as a breeding stud. As it turns out, I was generally pretty correct — but there’s much more to it than that. I researched the inspection process for four North American registries: KWPN, Hanoverian, Oldenburg and Rheinland Pfalz-Saar (RPS.)

Also called “keurings,” these inspections are typically held a few times a year and may tour in a few different locations to allow breeders all across the continent to attend. Foals, weanlings, yearlings, mares and stallions are generally all inspected: foals, weanlings and yearlings are presented in-hand. Depending on the registry, mares are presented in-hand and also may be required to complete a free-run and free-jump segment as well. Stallions, also depending on registry, must be presented in-hand, free-run and free-jumped, and also may be required to present under saddle as well.

All in-hand horses are typically presented on a triangle at the walk and trot to a panel of judges or inspectors and occasionally also a jury. Horses are to be shown at the walk and trot, then presented in an open stance so conformation can be analyzed. Conformation, movement, character, type and overall impressions are all weighted in a horse’s individual score, as well as soundness. Horses passing the keuring are then accepted into the various studbooks of their registry, and foals can be branded if applicable.

This is where the process gets really interesting: the standard stallion test for most warmblood registries was over a 100-day period in which the owners basically surrendered their stallions to a testing location for training and a intense regimen of observation. It was not a requirement for stallions to be started before going to a test; that process was thrown into the mix of the next hundred days. While 100-day tests are still held in various locations for certain registries, they are now often broken down into 30- and 70-day tests, and many registries offer even shorter 10-day options. Additionally, the tests may be circumnavigated completely in some registries if an inspected stallion has an outstanding performance record at a certain level.

Stallion tests assess the athletic ability, trainability, general manners and performance. “General manners” in this case also includes stall behavior, which is observed over the course of the testing period. Depending on the registry, owners may be allowed to provide their own trainer, or they may be required to use a certain professional. Even with owner-selected training over the course of a test, some breeds still require an additional professional to assess the horse from the saddle at the end of the test.

Testing is evolving with the changing nature of the sporthorse industry: the old requirements that were nearly identical across the board for a stallion to participate in dressage, jumping, cross-country and a hunt gallop are now being modified depending on the stallion’s selected discipline (dressage, jumping or hunters.)

Check each individual breed website for specific details on its testing process (the KWPN page, for example, was a mind-boggling list of test varieties and various levels of distinction that I found completely overwhelming.)

Pros and Cons of Inspections & Testing

While every registry in the world, from Arabians to Quarter horses, includes breed standards as part of their rulebooks, very few actually hold such inspections to make sure that animals are held to those standards. Having vigorous stallion testing is important for the continued evolution of a breed, making sure that only the best representatives receive the highest honors and marks of distinction.

However, stallion testing and breed inspections should not be viewed as the be-all end-all to creating the “perfect” sporthorse. While it’s been suggested that all breed registries include stallion testing as part of their registration process, it should be mentioned that testing is still subjective and still open to human error: the stallion Unee BB, who recently finished third at the World Cup dressage finals, was rejected from KWPN testing because his breeding was not “in vogue” — but has gone on to prove those judges wrong (due to his success, he has since been granted a premium license, but it’s worth noting that his owners could very well have given up and had him gelded.) The RPS website outlines a foundation stallion “Grande” who the website readily admits would likely fail a stallion test today due to his small stature and plain appearance. Ultimately, there’s no true way to predict how a stallion will perform as a sire, no matter how well he tests and how distinguished his career.

While responsible breeders hold up the stallion tests and horse inspections as a new standard, there are no rules that horses that fail the test can’t be bred — they just can’t be registered in the studbook. This means that less-scrupulous breeders can continue to produce stock from less-than-ideal parents. The bottom line still comes down to responsible breeding for the improvement of the breed as a whole, with stallion testing providing a set of standards for sporthorse breeders all over the world.