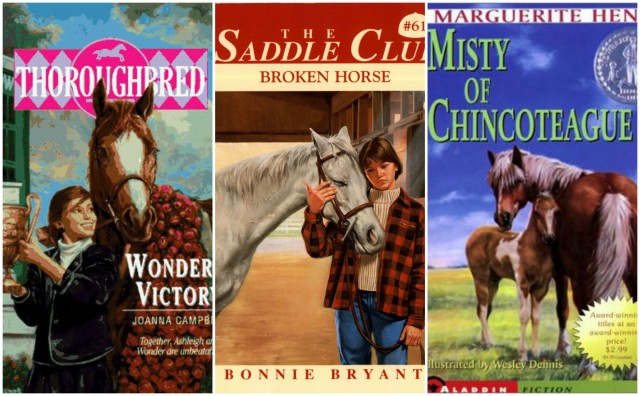 Because sometimes you just need that walk down memory lane to remind yourself that you’re old.

I distinctly remember dragging my poor single father to the closest bookstore and beelining straight for the section where I knew — like a beacon calling me home — my favorite books were waiting. As soon as I reached the right aisle, I hunkered down to find my next book. I needed two or three at a time, as I read so voraciously fast that it was a waste to go to the store for just one book. And there they were … the adventures of Ashleigh and Wonder (or some other descendant of the very fertile mare).

The Thoroughbred series was my book of choice as a kid. I read The Saddle Club, but I didn’t feel the same dedication to it as I did the others. I suppose it’s because I was a racing fan growing up, so the world depicted in Joanna Campbell’s series really spoke to me. Just the other day, I called my dad and asked if there were still any of those books lying around. Yes, I owned the entire series. Sadly, they seem to have gotten shuffled away in the various moves my family has made since then.

It got me thinking, though. There are so many things that remind us of our childhood on a daily basis. Lists such as these have us hitting the “share” button and tagging a friend like, “O.M.G. number 7 is totally me!” or “Oh wow, I feel old after this post!” So why not have a list of horsey things that will without a doubt make us all feel old? It’s all about the memories, y’all.

Is it just me, or does anyone else notice just how old these covers look now? Naturally, the last time I picked any of these up it was the 90s, but I remember the artwork looking very modern and “cool” at the time. Not that it isn’t to this day, but you can definitely tell how old these books are by looking at the cover.

Marguerite Henry was another classic. Between Misty and Black Gold and all of the other wonderful, fanciful books, I could lose myself for days on end. To this day, I still want to go to the pony round-up on Chincoteague Island. Thanks, Marguerite. Now I’m somehow going to find myself in possession of my very own Misty.

Fairly sure I owned all of these.

You’re going to laugh (or possibly relate), but whenever it came time to pack for a vacation or a trip to Grandma’s, I spent a very long time agonizing over which of my beautiful Grand Champions got to make the trip with me. I’m not joking; I had a huge collection of them and would always take two or three with me if I left home for an extended period of time.

I would feel bad leaving “Silver Charm” at home in favor of “Gem Twist”, but it was just spatially impossible for me to take them all. So, I made sure to rotate them so that they could see the sights with me. As soon as I got to my destination, the horses were the first ones to be unpacked and situated proudly atop my bedside table.

I remember asking for a Barbie car specifically so it could pull my horse trailer made of a shoebox around. I didn’t really care much for the Barbies that drove the car, as long as they drove carefully with my precious cargo.

You may have gone the Breyer route growing up, and that’s completely fine. The Grand Champions were just more accessible (and less expensive!) for me, so that’s how I ended up with a stable full. Don’t worry, though, I still lustfully eyed the Breyer display every time we went to a store that carried them. Little did I know that this window shopping would eventually manifest itself with real horses.

3. That one time we all called ourselves Karen O’Connor and won Rolex.

I played this a few months ago, I’m not even mad.

I can remember barn sleepovers where the majority of the night was spent fighting over computer time so we could take a spin on the latest and greatest game, Equestriad 2001. This game was THE BEST. Seriously, what other game could you gallop around Rolex dressed as Karen O’Connor or Phillip Dutton?

You could design your horse, your cross country colors, and decide what nation you wanted to represent (Karen was an Australian whenever I had her). Then, you could choose to gallop around Rolex, Burghley, Sydney, Badminton … some of the best courses in the world were at your fingertips. But only after you performed a tricky dressage test (complete with half-passes and extended trots — what?) using the direction arrows on your keyboard. If I didn’t know what profanities were before I started playing this game, I certainly knew by the end of my first dressage test.

The three phases each came with their own commentators, which would quickly tell you that it was “such a shame” you completely missed your distance to a big table or that I was asking too much of my horse as I galloped towards home.

I played this game with a friend a few months ago, and I was incredibly saddened to see how bad I was at it after so much time away. I think we scored a 90 on the dressage. I’m surprised we didn’t get rung out for sheer awfulness.

4. Being the coolest kid at school with all the Lisa Frank you could get your hands on.

The feels. So many nostalgic feels.

OK, I really was not the coolest kid in school. Not by a long shot. But I still felt like it every time I wandered down the school supply aisle at the end of each summer. Lisa Frank, man. So much Lisa Frank. It didn’t matter what animal you liked — there would inevitably be some blinding neon design that you just had to have.

Naturally, I collected every one with a horse I could possibly find. Sure, I need sixteen folders with unique designs on them. I’d find a use for them, don’t worry. If only they made Lisa Frank Trapper Keepers, then my life would have been complete.

5. Spending endless summer days at the barn, perfectly skills such as these:

We used to have a “kid jumping” competition at the end of each summer camp session, but none of the kids had mastered the all-fours technique like little Anna in the video above. Impressive.

These days, now that we all have “real” jobs and responsibilities, it’s easy to look back on a time when we were more or less care-free and our only worries were what garish color saddle pad we would annoy our trainer with next.

But even when we take a moment to remember the time of our lives that really gave us the horse bug, we can still smile and remember that the horse crazy kid still lives inside us. Yes, we may be “grown-up” now, and yes we understand that horses cost money and time, but we wouldn’t give up that crazy gene willingly. So keep that inner horse kid alive, HN! Let that freak flag fly, and maybe go dig up your Thoroughbred books for a good read tonight. We won’t tell anyone.