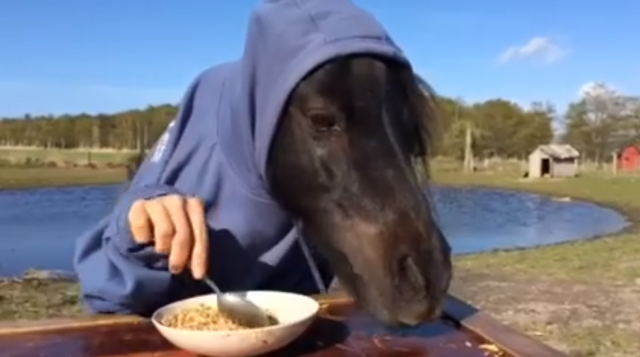 Unsurprising to no one, ponies are less cooperative than dogs for this running gag.

Have you seen the hilarious video jokes in which people take their dogs, stuff them into an oversized sweater with themselves, then feed them at the dinner table? For whatever reason, it never gets old to see a dog with human hands using silverware. This video illustrates the concept:

And finally someone’s done it with a pony … and while the sight of a pony in a hoodie is pretty hysterical, ponies apparently don’t eat with quite as much fervor as dogs. (Log in to Facebook to view.)

For crying out loud, someone teach this pony some manners … he has no idea how to eat with a spoon. Kudos to whatever person is crammed into this sweatshirt with this pony, because that’s gotta be a tight fit.