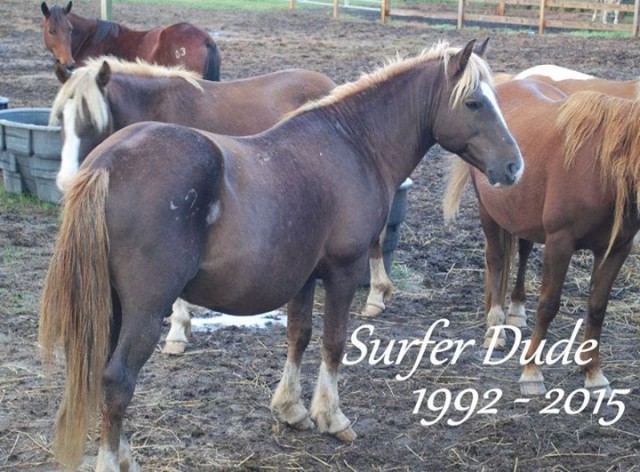 Islanders and visitors alike mourn the loss of one of their beloved band leaders.

Chincoteague Island has been a beloved tourist attraction and wildlife experience for decades, particularly after Marguerite Henry’s books made Misty and her herdmates the stuff of childhood legend. While Misty has long since faded into the annals of time, other horses have become every bit as beloved by the community and island visitors, including the sturdy chocolate/flaxen stud, Surfer Dude. Last week, The Chincoteague Volunteer Fire Company (CVFC) announced that the 23-year-old alpha male had been found dead after an exhaustive search of the island.

It was first noticed that Surfer Dude was missing when he did not show up with his tracked band of around a dozen mares and their foals in the annual spring roundup. Also notably, Surfer Dude’s son Riptide came in with the band, after previously being a lone roaming bachelor.

According to the CVFC’s announcement, “after a few weeks of searching, our greatest fears have come true: the remains of our beloved Surfer Dude have been found and positively identified. Our cowboys diligently and patiently covered every square inch [of the island] and he was found in a very remote clearing in the southern compound, so remote that the cowboys actually had to walk in the area in which he was found.”

The stallion was identified with certainty by microchip. The cause of death was not determined, but the Pony Committee noted that it had been a rough winter on the herds. Even with hay and water interventions from the Fire Company, they said they were lucky not to have lost more.

Denise Bowden, an island native and 28-year member of the CVFC told USA Today that there were no plans to move the body or mark his grave, but they were planning to make a memorial banner for the carnival grounds. “He’s such an icon, you could never do enough to memorialize him,” she said.

That also means that this year will be the last chance to adopt one of the offspring of Surfer Dude at the Pony Penning Auction, and the demand could be quite exceptional.

Ponies swimming for the roundup and sale. Erin Eve Flickr/CC

But it may not be the last, only, or most practical way to remember the handsome pony stallion. There is currently a petition to Breyer Model Horses to make a model Surfer Dude. According to the change.org site,

“His stunning looks and exuberant personality made him an instantly recognizable figure, and he has sired numerous foals who share his unique character. He has done nothing but improve the Chincoteague pony herd over the 23 years of his life. To his fans he is one in a million; a fierce and powerful stallion who could go straight from a fight right back to gently nuzzling his mares and foals.”

The petition currently has 848 supporters, 152 short of the 1,000 needed to forward the petition to the Breyer Horse Company.

Just as no one could replace Misty, none will replace Surfer Dude. But the legacy lives on in Riptide and his sire’s band, and the natural circle of life and death will continue on Chincoteague and Assateague islands for as long as the horses have the unending support of the community, the volunteers, and the island visitors.

As the Volunteer Fire Company so aptly put it, “We are so thankful that he lived, breathed and passed in the only home he has ever known. May his spirit continue to roam Assateague forever.”