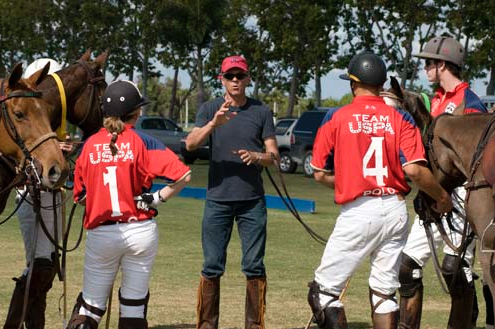 Team USPA is a new addition to a very old sport, but it is changing everything.

Team USPA was created in 2010 to provide mentoring, training, networking and playing opportunities to young players. To say that this program has been successful would be the understatement of the century. Team USPA just had its second-best finish in the history of the FIP World Polo Championship, overshadowed only by USA’s victory in 1989.  The young team went to Chile as underdogs and left with a new level of respect and a nickname, The American Machine.

But the best parts of Team USPA can’t be summed up through competition records and highlight reels. The program is striving to create “true professional horsemen and women,” said Amanda Snow, USPA Director of Player Development.

To get an idea of the program’s curriculum, take a look at this in-depth lecture with 10-goal player Adam Snow. This session is about the mental aspects of the game and could certainly be applied to all equestrian disciplines.

They also attend lectures to discuss conditioning and nutrition…

The minutiae of tack choices…

And career goals among other things.

Even more clinics held in Wyoming give riders the opportunity to back 3-year-old horses and obtain an umpire certification, a requirement for the team.  Shane Rice, player/umpire, details his philosophy in teaching the rules of the game. “I tried to get these new players to focus on two important things – consistency and safety,” said Rice. “Accidents are fouls, to be fair, but be severe whenever a horse is put in danger by a player.”

I recently had the opportunity to speak to two Team USPA members about how the mentor program has changed their lives.

Gates Gridley started playing polo when he was eight years old at the Yale Equestrian Center and, after riding Intercollegiate/Interscholastic, was recruited for Team USPA in 2013. “Team USPA gives opportunities that you just couldn’t find otherwise. It’s amazing to have people looking out for you from day one,” he said.

He loved his experience at the Houston Polo Development Conference in Houston, Texas where over forty instructors lectured on club development, coaching and mentoring.

Kylie Sheehan was also recruited for Team USPA in 2013 after learning from Cindy Halle at the Garrison Forest School for Girls and playing at the University of Virginia. Coming from a non-horse family, Kylie knew that after graduation she had a big decision to make … utilize her degree in foreign affairs or play polo?

Without the financial aid provided by Team USPA, her decision might have been very different. “Everyone in the sport is so generous and Team USPA channels that generosity.”

She has since travelled to Malaysia, Singapore and Argentina. “And I’ve never paid for a single chukker,” she says with an ear-to-ear grin. Kylie now works for the USPA managing The Horse Donation Center, which enables polo players from around the country to make tax deductible donations of polo ponies to the Team USPA program.

During my interviews, the general consensus of Team USPA is that it grants young riders an opportunity for immediate and unrestricted access to the highest level of professionals in polo. That is pretty rare in any sport, not just equestrian disciplines.

Now that development programs are all anybody can talk about, do you think Team USPA should become a model for all disciplines? Shout out, Horse Nation!

For more information check out US Polo and Team USPA Facebook.