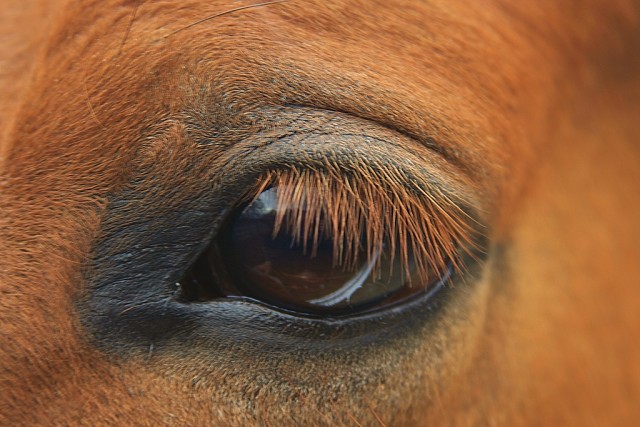 Animal abuse is wrong — but what looks like a black and white issue really contains a million shades of gray, and our equestrian lifestyle may be at stake.

“The disappearance of animals from our lives has opened a space in which there’s no reality check on the sentiment or the brutality [ … ] the loss of everyday contact between ourselves and animals — and specifically the loss of eye contact — has left us deeply confused about the terms of our relationship to other species.” — Michael Pollan, “The Omnivore’s Dilemma

Every day on her drive to and from work, the woman saw the horse, turned out alone in a small paddock by the side of the road. The horse’s ribs and hips were showing; his coat looked matted and muddy. Some days, she even saw the obviously-starving horse gnawing on his wooden fence. Outraged that an animal could be treated this way, she notified the proper authorities, reported the abuse, and was satisfied to see police cars parked at the farm soon after.

This story sounds like one of thousands across the country: a scrawny horse is found in a pasture. Concerned passersby, worried that the animal is starving, call the police, the humane society, the local horse rescue. They take to social media, sharing the word that animal abuse is taking place in their very neighborhood. Others among us see the Facebook post, the tweet, the photographs, and we commend that person for acting to save an animal’s life. These animals can’t speak for themselves; they can’t help themselves. It’s up to us to help them.

But let’s see the other side of the above story.

They had managed to nurse the old horse through another winter, which always took its toll on him at his advanced age. But he had a good quality of life: he still kicked up his heels in the pasture in the summer, bedeviling the younger horses. Their children and dozens of their friends grew up riding this horse. He owed them nothing but a happy retirement. Sure, it took him a little while to pick the weight back up in the spring, despite regular veterinary attention and routine dental care. So they turned him out alone for a few weeks where he wouldn’t have to compete for food until the weight was back on. The old horse was a cribber, and he was systematically working his way down the wooden fence line, but at this point in his life, he wasn’t about to change.

And one day the cops showed up to notify the owners that they were being charged with animal abuse: the thin horse that was eating the wood in their roadside pasture was starving. While subsequent visits from the veterinarian and law enforcement proved that there was no case of abuse whatsoever, the family with heavy hearts euthanized their old companion, feeling the eye of the community sharper than ever.

Sound too ridiculous to be true? Yes, this is a true story that I heard at an equine educators’ conference about two years ago. Well-intentioned animal lovers — not necessarily horsemen or horsewomen — don’t understand what they’re seeing, call the authorities, and forever tarnish the reputation and good name of a farmer, stable or individual owner. And it’s a problem that’s not going away in a world increasingly hypersensitized to perceived animal abuse.

It’s happening all over the country: perhaps you’ve heard about West Wind Acres, the pasture-raised meat farm in downstate New York, the farmer of which was briefly imprisoned and is still fighting in court after an anonymous complaint was filed that he did not have his animals in a heated barn over the cold winter (his horses were seized and sent to a nearby shelter, though a veterinarian gave all of the livestock a clean bill of health in good weight). Or perhaps you’ve been following the saga of Tawni Angel and her ponies: our friends at Horses in the Morning shared this story last week.

Tawni was on our show last year and unfortunately lost her battle with the city of Santa Monica. I know their are many…

The gist of Tawni’s story is that complaints were lodged about her pony rides and petting zoo at the Santa Monica farmers’ market. When no evidence of abuse was found, those originally lodging the complaints started a defamation campaign, dredging into Tawni’s personal and criminal history. Though no legal charges have been filed against Tawni, she recently announced that she had given her last pony ride at Santa Monica, despite overwhelming support from the community in favor of her ponies and petting zoo. While some Facebook commenters thought that perhaps Glenn was a little harsh in claiming the animal rights people were coming after our horses, I think it might be time that we sit up and take note of cases like this.

Please don’t misunderstand me: animal abuse is wrong. I am sickened when I read accounts of puppies being drowned or tortured, farm animals being set on fire, or even that bizarre and shocking Monica Thors case from a few months ago. If an animal is starving or injured because of the ignorance of its owner, the animal should receive help and the owner should be charged accordingly.

But there is a gray area here. How often do we joke that the rest of the world just doesn’t understand us equestrians? That’s always been a point of humor here at Horse Nation; some of our most popular and classic articles have been hilarious moments when we’re misunderstood by the real world. But the day is coming in which these moments will no longer be funny, when an animal lover fails to understand the old horse, the sick horse, the temporarily-lame horse. Or perhaps it will be the round pen, the lunge line, the riding crop. Perhaps your stalled horse, who deserves his freedom — or perhaps your pastured horse, who ought to be kept inside in a heated barn. All of these are routine parts of horse life, but to uninitiated, they are bizarre, maybe even barbaric.

One of the double-edged swords in the fight against animal abuse has to be social media. We can share the word to all of our friends and followers, instantly, about anything. Animals get people particularly heated. One of the saddest things I remember reading came through my Facebook news feed a few months ago: a rescue had posted a photo of two horses that had been recently surrendered (keep in mind that a surrender means that the owner himself has turned the horses over — they have not been seized). Their feet were dreadfully long and they were on the thin side; their manes were matted and they hadn’t seen a good brushing in quite some time.

Other folks had left literally hundreds of comments: “This is disgusting. These people deserve to ROT IN HELL.” “Let’s starve the owners and see how they like it.” “Folks like this ought to be shot or hanged. Who could do this to these beautiful babies?”

The rescue finally had enough and posted again about 24 hours later. The pair of horses had been surrendered by an old woman, whose husband owned and loved them dearly and made a point to go out to the barn every day to take care of them. Then he suffered a stroke, and was unable to get around as often. Finally, after months, the elderly couple realized they were in over their heads and regretfully surrendered their beloved pets to the shelter.

Had things gotten out of hand with these horses? Definitely. Did this couple deserve to be told that they should be shot or hanged for eventually doing the right thing? Certainly not. But it’s so easy now to see an image and instantly jump to the wrong conclusion — imagine the potential for what we think is funny or interesting to be completely misinterpreted.

I’m calling on all of us as equestrians to be the voice of reason in the passionate and complicated issues of animal rights and animal abuse. It’s up to us to educate our fellow animal lovers who might not know that the horse with the long coat in summer has Cushings, or that the horse that’s kept in the barn right now is just suffering from an abscess. If we don’t take the responsibility for our horses and our very lifestyle, responsibility will be taken for us, and we may not like that outcome. By all means, report animal abuse through the proper channels and educate each other on better, more humane practices. But above all else, be the voice of reason that we so desperately need right now.