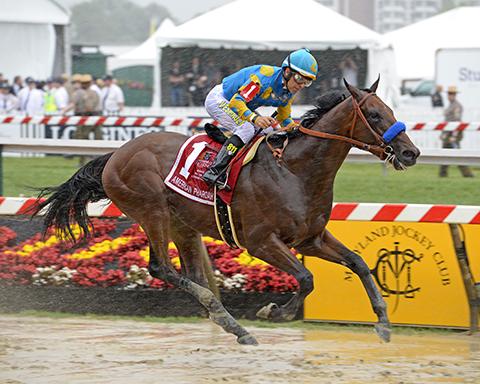 Despite the rain, sloppy track, and lightning (!) American Pharoah led wire-to-wire in the 140th Preakness Stakes.

The clouds hung low over Pimlico all afternoon, but took on a particularly foreboding hue a few minutes before 6:00 on Saturday evening as the eight horses were being saddled. Raindrops dotted the shoulders of the crowd, first a few, then more. A rumble greater than the excited hum of the infield echoed over the track … and then the skies opened up as the post parade headed to the gate.

The infield was evacuated to covered tents as lightning flashed over Maryland. But nothing was going to slow American Pharoah today. The favorite and winner of the Kentucky Derby broke quickly from the typically unfavorable number-one position on the rail and jumped to the lead. In a beautifully-strategized trip, Victor Espinoza hustled the colt to an early lead, then let him settle, even allowing the rest of the field to catch up on the backstretch (in a stomach-dropping moment for the rest of us watching, to be sure.)

But Espinoza and American Pharoah were simply taking a breath. As the field rounded for home, the bay colt drew away from the field, heedless of the slop and the still-falling rain, crossing the finish line in a style reminiscent of his prep-race victories, ears forward.

The rain, if anything, may have aided American Pharoah’s victory: out of the eight-horse field, he was the only horse with a record of winning in sloppy conditions (he romped in the Rebel Stakes over a sloppy surface.) Apparently unfazed by the storm rolling right over Pimlico, American Pharoah looked the part of the champion as he cruised home, still clean and in front.

Of course, with two-thirds of the Triple Crown won, the question on everyone’s lips is whether or not American Pharoah will win the Belmont and make history, the first Triple Crown winner since 1978. The usual challenges face him: a longer distance, fresh horses coming in from the Derby who skipped the Preakness. But as trainer Bob Baffert stated in a post-race interview, “I don’t even want to think about it right now. I just want to enjoy this moment.”

Did y’all hear that? Before the race Stevens was 120lbs, after with the rain and mud he was 135lbs. Knew there was a difference but wow!

It poured. He reigned. Congratulations to @ZayatStables and team on American Pharoah’s #Preakness2015 victory! pic.twitter.com/qWgoQTacqp