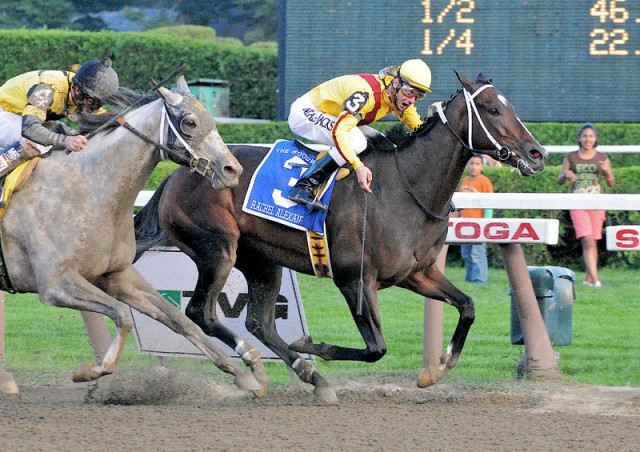 With the Preakness approaching this weekend, we’re counting down our favorite past races!

The Preakness Stakes always brings about a sense of hopefulness, perhaps mixed with a dash of wistful dreaming. Each year, thousands of race fans will lock eyes on the Derby winner, assessing the taut muscles and flared nostrils as he marches back to the winner’s circle. These thousands of fans will think ahead to the Preakness, the second jewel of the Triple Crown.

Will this horse, so celebrated today, on Derby Day, have what it takes to claim the second race? If that happens, will the near impossible then follow with a Triple Crown win in the Belmont Stakes?

It’s this hope — and perhaps a few superstitious rituals — that keep us fixated on the Preakness Stakes, and the center of our attention this year is American Pharaoh. The strapping bay colt won the Derby in style, and now he’s poised to make his way to the history books with another win this weekend.

In honor of the upcoming Triple Crown leg, we thought we’d take a look back at a few of our favorite Preakness moments. It is #throwbackThursday, after all!

Afleet Alex’s Preakness will forever be remembered as one of the biggest show of guts the racing world has ever seen. I’m not sure any of us want to think of the alternative outcome to this crazy accident, but I think it’s safe to say Afleet Alex won our hearts that day.

Another instant classic, the battle between greats Affirmed and Alydar. As we all know, Affirmed would go on to be the most recent Triple Crown winner a few weeks later. That doesn’t make this battle right down to the wire any less nail biting.

I think there’s a lot of Smarty Jones fans out there. And with a story like his, who wouldn’t love him? When he won the Preakness decisively, to put it mildly, I think a lot of people were hedging their bets on a Triple Crown winner.

While we weren’t going to have a Triple Crown hopeful in 2009, this edition of the Preakness was worth the loss of the dream for another year. A filly won the big race! Rachel Alexandra became the fifth female to win the Preakness since 1924, handily beating the boys and marking her spot in the history books.

Of course, no Triple Crown list would be complete without a nod to Big Red himself. Secretariat made a quick stop on his way to winning the Triple Crown, leaving no doubt that he was one of the greatest Thoroughbreds to walk the planet. His stride was over 25 feet long, you guys. Enough said.

I know we likely left off some favorites from our list, so we want to know who you would add to the list of Best Preakness Moments! Comment below with your addition.