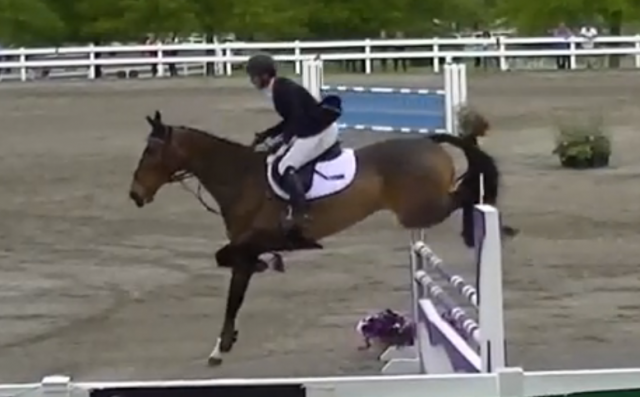 Few horses could land a jump on just one leg and recover to walk out of the arena — but that’s exactly what Tamie Smith’s Fleur de Lis or “Milton” did on Sunday, May 1o at the Jersey Fresh International. In the show jumping phase of competition, Milton stumbled badly on the landing of a fence after landing on just one foot, causing Smith to nearly fall. The pair was able to keep their footing and recover, though the pull-up counted as Smith’s second refusal on course and she was therefore eliminated.

Okay — but what caused Milton to land on one foot in the first place? Watch closely:

What’s that there, dangling from Milton’s belly guard girth? Why, it appears to be his left front shoe.

Milton actually hooked his left front shoe on the clip for the belly guard, effectively attaching his leg in the folded jumping position. The horse had to literally rip his shoe off in order to unfold his leg a stride after the landing.

While this isn’t our typical Performance of the Week material, we applaud Milton for his amazing athleticism, first in landing on one leg in the first place and second for the strength to remove his own shoe to recover the use of all four legs. This totally-freak accident could have had a much more tragic ending, but Milton walked out of the arena, left shoe dangling from his girth.

In a Chronicle of the Horse article, Smith states that she will be duct-taping the clip on her girth in the future.