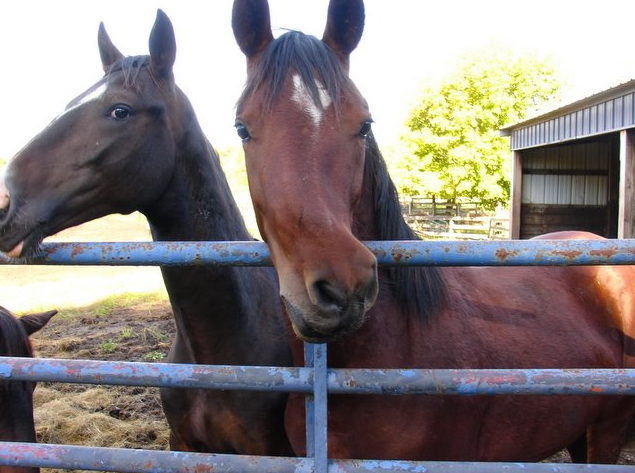 Amanda Uechi Ronan, #HorseNerd, details wry nose in this week’s “What the Muck Is That?”

A few weeks ago, I happened across this picture of an adoptable horse.

You might notice something strange about the horse’s nose? At first I thought the photos had somehow been altered, but, as it turns out, this is a condition called wry nose.

What is wry nose?

A horse with wry nose (sometimes called wry mouth) will have the upper jaw and nose deviated to one side. It is a rare congenital deformity, meaning the horse is born with it, but there is no evidence that it is hereditary. There is also no evidence on what causes the deformity, but most veterinarians believe it is the result of bad positioning in utero. Wry nosed foals sometimes have other deformities in the neck and limbs.

What are the problems associated with wry nose?

A deviated nasal septum is the primary problem with wry nose. The horse can have trouble breathing. There is also usually poor tooth/jaw alignment which can give foals difficulty while nursing and later grazing.

What can you do for wry nose?

Foals with a very mild case of wry nose at birth might grow out of it, but severe cases must be treated surgically. Multiple surgeries are usually needed and there is significant aftercare involved. The reconstructive surgery can be very expensive.

Are there any success stories?

Hope for Horses in North Carolina has Dollface, a 14-year-old Egyptian Arabian that is available for adoption. According to Horse and Man, Dollface was scheduled for euthanasia at birth when Hope for Horses stepped in. She was able to nurse from a bottle and has lived at the adoption center her whole life. Although she is described as “complicated” on her adoption page, she is a happy, healthy horse that is able to graze and drink normally.

Beauty’s Haven Farm & Equine Rescue similarly, has been a part of Aaleyah Belle’s entire life. Aaleyah is a permanent sanctuary horse and is not available for adoption. Aaleyah was also scheduled for euthanasia at birth, when BHFER acquired her and her dam, a 16-year-old Thoroughbred. The dam was very thin and a nurse mare, named Buttercup, was brought in when she lost the ability to produce milk. Aaleyah underwent a successful reconstructive surgery in May of 2008. Now she eats, drinks and rides like a normal horse.