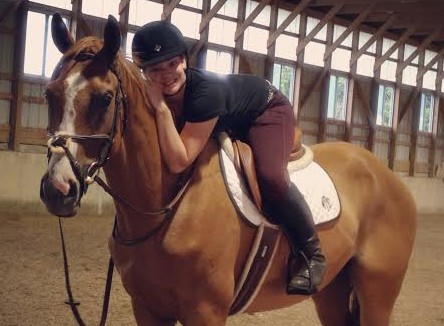 Each week we feature reader-submitted stories about horses that have gotten them “back on track” after a rough patch. Today Mackenzie Towler shares the story of her horse, Tooki.

My trainer at the time had gotten a young chestnut gelding off the track named Tooki about a year and a half before I sold Riley, my fabulous Hanoverian hunter. When he got the horse, he was a half-crazed two-and-a-half-year-old who was having issues breathing. He sent Tooki to Pennsylvania to have a mass removed from his right sinus cavity to help him breathe. The young, spunky horse then spent months in a stall, only becoming more difficult to manage. Winter came and my trainer was set to go to Florida to show, so he sent the horse to recover at another farm in the area.

By the time Tooki came back he was very difficult to handle and my trainer realized he did not have the time to give to the horse. I took Tooki and he went to college with me. He injured himself the day I bought him and spent 2 months on stall rest where we learned all about each other. For the next year, we spent much of our time learning that the world would not eat him, until he was diagnosed with EPSM. He then spent a month getting himself back together. Only the best feeds and exercise program would do.

In December of 2013 I moved four hours away from home to look for a job. After three months of finding nothing and becoming incredibly depressed I convinced my parents to let me bring Tooki to live with me. I then got a wonderful job as a veterinary assistant and am now going to school to be a licensed veterinary technician. I cannot imagine what would have happened if Tooki had not come to live with me. He pulled me out of the darkness and forced me to see outside of my problems.

When I think of him I have only smiles and unconditional love. He is my rock.