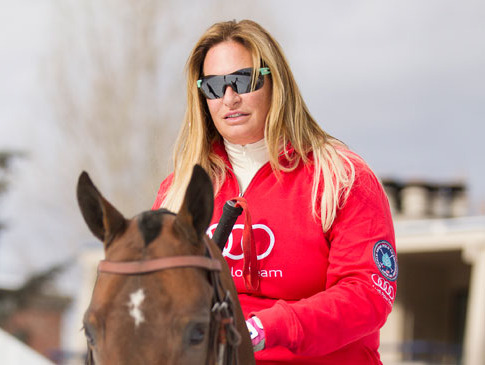 She may hobnob with the likes of Prince Harry, but at her core Melissa Ganzi is just another loving mom, dedicated wife, philanthropist and equestrian.

Melissa Ganzi began riding in Equitation and Hunter divisions through her local Pony Club. She leans back in her chair and smiles as old memories bubble to the surface. “I remember, I was riding with my club and we were headed to a foxhunt. When we got there, though, the jumps were bigger than our ponies! We got stuck in a field, a bull chasing us, having to chase our ponies over the fence … it was a disaster. What seemed like hours later another hunt group finally rescued us. Later, in the local newspaper we read, ‘Local Pony Club Crashes Onassis Hunt.’”

Melissa and Take A Chance, her horse she purchased as a 4-year-old from a Pennsylvania Dutch Amish farmer.

Some of her best childhood memories include heartwarming mishaps, like her description of one of the few times she competed in Devon. “Our ponies weren’t used to the big lights,” she says. “And one of my team member’s ponies just would not go forward. We were all standing there waiting for her, determined to jump the last jump together like we practiced. We didn’t care if they kicked us out. We were doing it!”

That sort of tenacity is still evident in Melissa’s life today. She is one of the very few female high-goal patrons of polo. Pronounced pa-TRON-ess, patrons partially fund the team, manage players and play in the game. That’s right, amateur team owners regularly play with their hired professionals. Melissa has racked up dozens of championships over the years and made history when she helped set a world record for the most consecutive chukkers played, 32 in a benefit for the Wounded Warriors project in Aiken, South Carolina.

She was also the first female player to win The USPA Monty Waterbury Cup (2001).

It was her father-in-law Walter Ganzi that first introduced Melissa to the sport in 2000. She was given a polo pony for her birthday. “As you know, you can’t have just one,” she jokes during our interview.

Soon after, the Ganzi family relocated to Wellington, Florida. “We wanted a place to raise a family,” Melissa states, though she admits it’s also conveniently the heart of American polo. Argentine polo player Juan Bollini was Melissa’s first coach. Now the Ganzi family owns Aspen Valley Polo Club and Grand Champions Polo Club where, quite literally, they have polo fields in their backyard.

But their passion for the sport didn’t stop there. Melissa and her husband, Marc, made it their mission to build a community polo club. Marc told Equestrian Quarterly in 2013, “We wanted a place where the locals can come and play year round. We keep the spirit of the club very casual and keep it accessible to year round residents of Wellington.” Grand Champions hosts the International Gay Polo Tournament, Women’s Championship Tournament, International Cup and several junior tournaments annually.

A strong sense of community was exactly what I felt when I attended three matches on a breezy Saturday afternoon in April. White tents were set up on the sidelines, but many people were simply tailgating. There was a lunch buffet provided by Chipotle and drinks, free of charge. In the evening, a traditional Asado menu was offered. Many spectators were chatting causally, but most lay rapt as the horses thundered past, their breaths in time with hoof beats.

As I sat with Melissa watching a 16-goal match she said, “We want everyone here to feel like family. That is what we always set out to do.” She gifted a toy mallet and ball along with a baseball cap to my 6-year-old daughter who couldn’t attend. “Bring her here for lessons one day,” Melissa laughed.

Unofficially titled “The First Family of Polo,” the Ganzi’s influence is felt on and off the fields. Melissa is a prominent fundraiser for the National Museum of Polo and Hall of Fame, USPA’s Florida Circuit Governor and 2015 Polo Training Foundation’s Volunteer of the Year.

“Melissa is such a strong intelligent woman, but it is her heart and willingness to give and help that truly inspires me. I cannot even begin to describe how much she does for junior and youth polo. She goes above and beyond to not only help continue the sport into the next generation but also ensure that all the players have fun every time,” said PTF assistant executive director Jennifer Poor McLeavy in a press release.

Ganzi has pioneered several new programs in youth polo. She introduced ProKidz during the 2014 polo season, a program that pairs a mentoring pro with junior riders. Melissa’s own children are avid polo players. Her son Grant is the youngest player ever to win the Hall of Fame Cup championship (2014). He was playing against his father, but that is a whole ‘nother story.

And now Melissa hopes to spread polo to the masses outside Wellington with Chukker TV. Most tournaments are live streamed free of charge. The program boasts a ‘drone view’ that is just plain awesome. You can also get live updates @ChukkerTV.

Still, at the end of the day Melissa is just another horse-crazed girl. When Broward Palm Beach asked her about the handsome, tanned Argentine players she said, “The real sex symbols are the horses. To me, it doesn’t matter who is on top of them.” #horsegirl

It was my extreme pleasure to meet Melissa on her home turf. I hope to return some day and play a few chukkers.

Somewhere in the middle, Audi Q7, of course. If needed to pick one of the above, I would go with the pickup truck.

Ride at sunrise or sunset?

#1 thing horses have taught you?

To believe in myself.

For an insider’s look at polo in Colorado and Florida, check out Melissa’s Twitter @melissaganzi