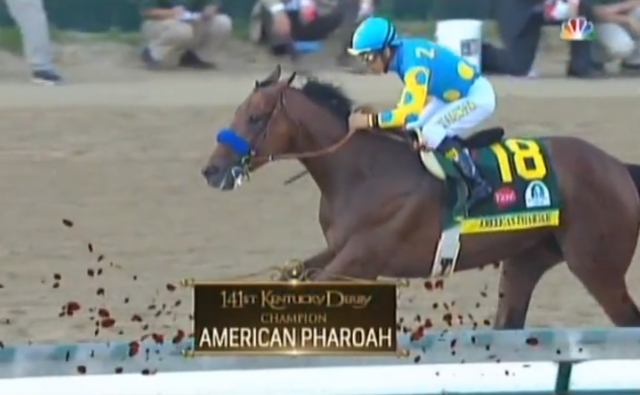 Out of one of the deepest and most talented fields in recent Derby history, American Pharoah edged out the win.

In horse racing, there’s almost always a favorite to win — but that’s no guarantee of success. And in this year’s particularly strong Kentucky Derby field of twenty talented colts (though only eighteen ultimately started) never was this more true: with so much potential for anything to happen, any choice seemed both right and wrong. But as the field surged down the homestretch, any doubt on Derby day was settled as one colt rose to reign: American Pharoah battled his way to win the 141st running of the Kentucky Derby by a length.

American Pharoah, owned by Zayat Stables and trained by Bob Baffert went off as the 5-2 favorite at post time, but he had his work cut out for him: the son of Zayat’s Pioneer of the Nile (a second-place Derby finisher) started from the 18th post position far to the outside, meaning that he’d have a lot of ground to make up right from the start. Heavy hitters also breaking from the gate included previously-undefeated Materiality, tough fighter Firing Line, Wood Memorial winner Frosted, and of course, the other Baffert-trained colt, the formidable and undefeated Dortmund.

Dortmund went right to the lead but set a slow place; Firing Line followed just in his shadow with American Pharoah cruising cleanly to go wide in third just off Firing Line. By the final turn, it became clear that this Derby, for all its depth and breadth of a field, was rapidly becoming a three-horse race. Firing Line moved up to challenge Dortmund in the turn (Firing Line’s jockey Gary Stevens reportedly stated that he had twice battled Dortmund before but moved too soon) and took a slight lead.

As the field turned for the stretch, American Pharoah under Victor Espinoza (yep, you remember him from California Chrome fame) moved in to challenge the leaders, with Firing Line wide to Dortmund’s outside and American Pharoah even wider. For a moment, the three horses were stride-for-stride, surging towards home, too close to call — but then Dortmund began to fade, and then with a sixteenth to go Firing Line dropped behind as well. American Pharoah finished a length ahead.

Considering his wide trip, American Pharoah performed well in a tough race, finally showing the world what he’s truly capable of (prior to the Derby, he had never really been tested.) Could this be the Triple Crown winner we’ve been waiting for?

Jockey Victor Espinoza, after winning his third Derby and second straight: “I feel like the luckiest Mexican on earth! He’s been a special horse…he’s tremendous…he’s an unbelievable horse.”

We’ll be following this team with our Triple Crown hopes. Go American Pharoah!