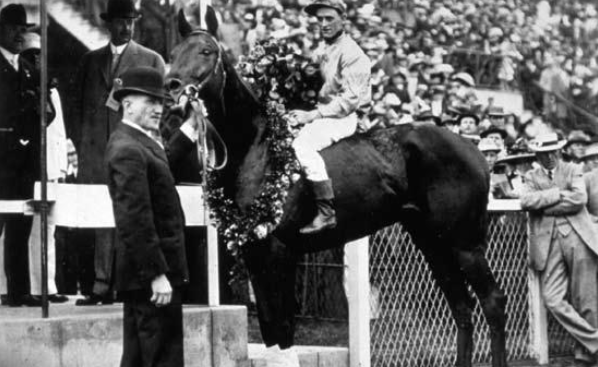 Americans love rooting for the underdog in any fight — especially America’s biggest horse race. Heather Benson counts down a few of the biggest upsets in Kentucky Derby history.

In 1953, only one horse was supposed to win the Kentucky Derby and that was Native Dancer, a.k.a. The Grey Ghost. When he chose that day to have the worst race of his entire career, upstart Dark Star took his place in history instead at odd of 25-1.

While he certainly wasn’t the favorite when he won the roses on the first Saturday in May in 1918 (winning at odds of 29-1), Exterminator was rarely anything BUT the favorite after that. A grand old gelding that won most of America’s most prestigious races, he finally retired at age 9 after many years of being a fan favorite around the country.

Trainer D. Wayne Lukas sent both Cat Thief and Charismatic into the gate for the 1999 Kentucky Derby and nobody thought that his “second string” horse, who just months before had raced for a claiming tag and sporting a jockey that was desperately trying to make a comeback as well could win the race. But win they did, in fine style at odds of 31-1,paying nearly $65 to anyone who had been brave enough to bet $2 on the unlikely pair.

While royally bred, by champion sire Sir Gallahad II and out of a daughter of 1928 Horse of the Year, Reigh Count (himself a Kentucky Derby winner), he had a very up and down spring in 1940, losing badly in his first two races but then finally winning in his last two starts before the Derby. As a “California horse,” he was ignored at the windows by the Kentucky hardboots and sent off at odds of 36-1 and took the race over favored Bimelech.

Gallahadion, winner of the 1940 Kentucky Derby. Photo courtesy of delcampe.net.

Much like the famous mare, Zenyatta, who boasted his same racing connections, Giacomo liked to come out of the clouds to win a race. Sometimes he got there in time, sometimes he didn’t, but he did manage to get there first on the day in counted most, in the 2005 Kentucky Derby. He won at odds of 50-1, paying $102.60 for every $2 bet to the lucky few who had their money on him.

Mine That Bird, like Giacomo, won his race by closing from far, far back — only his brave jockey, Calvin Borel, did it by weaving him up the rail in a stunning upset. The final odds were 50-1 and that number is now ingrained in history with a biopic movie of the horse out this spring, called, of course 50-1.

It is unlikely that any horse will ever be the ultimate longshot that Donerail was in the 1913 Kentucky Derby. Completely ignored by virtually every bettor at the track, he was sent to the post at odds of 91-1. A few minutes later and he had crossed the wire a half length in front of the next horse and paid his backers handsomely, a whopping $184.90 for each $2 bet. Donerail went on to have a solid career at the track, running in 62 races and winning 10 of them.