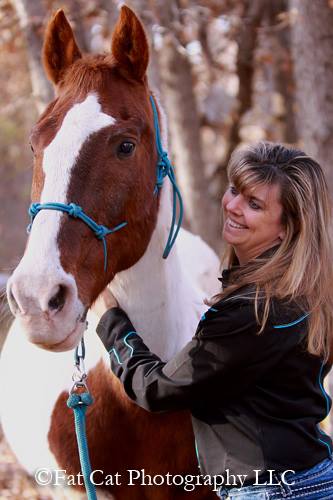 Each Friday, Horse Nation teams up with Ovation Riding to spotlight an individual or organization that is doing good work in the horse world.  This week, we salute Blaze’s Tribute Equine Rescue.

The organization was nominated for this week’s Standing Ovation by reader Misti West:

I thought you might be interested in a horse named Rudy from Oklahoma who was tangled in a fence during an ice storm and called in as dead but was actually alive and had been left in that state for two days. I hope you will consider writing something about this organization; this is a family-run rescue that has handled nearly 1,200 horses in their 10 years of operation, and they deal with STAGGERING abuse and neglect cases.

I use to volunteer at the Oklahoma City Animal Welfare Division with the dogs and cats. Even as a volunteer, I had no idea that they took in horses and other livestock as well. In 2001, a new supervisor came into the shelter and she held a meeting for all the volunteers so that she could express her plans for the future regarding the shelter animals. During the meeting she spoke of the horses. Oklahoma City Animal Welfare investigates animal cruelty for livestock as well, and would seize quite a few horses. I had asked her what happened to the horses once the case was closed. She informed me that they sent them to the Purcell Livestock auction. I was stunned and stated that wasn’t promising them any better of a future, as most were probably sent to slaughter. She informed me that they didn’t have any other options, as there weren’t any horse rescues to assist. My immediate response to her was “You do now.”

On a complete impulse, I declared to start an equine rescue. I immediately went home and told my husband my plans. I was met with a bit of shock but of course, he was completely supportive of my idea. Neither of us dreamed that our rescue would turn into what it has 14 years later. We truly had no idea of the huge need here in Oklahoma. I am proud of the movement we have made and all the wonderful relationships we have developed with so many County Sheriffs’ Offices, who are now so supportive and willing to investigate animal cruelty cases.

What happened with Rudy and what has he had to endure so far in his healing process? What are the long-term plans for him?

A heavily bandaged Rudy on January 3, 2015 just after being rescued.

Rudy came to us on January 2, 2015. Rudy was reported to the Oklahoma City Animal Welfare Division as a dead animal. Rudy had somehow escaped from his normal enclosure, resulting in him being tangled up in chain link fencing. Oklahoma weather during this time was extremely cold with icy conditions. Rudy was spotted by his former owner trapped on the ground in the fencing, head covered in blood, and he immediately assumed he was dead and called Oklahoma City Animal Welfare Division to pick up a dead horse. Due to the fact that they called on New Years Day, a holiday, the shelter did not go out until the following day, since he was reported as dead. They showed up on January 2nd, to find Rudy was very much alive. His face and ears had been attacked by dogs, resulting in his ears being chewed off, half of his face torn off, leg wounds, etc. Once Rudy was removed from the fencing, he stood up. This horse hung on for 2 days, on the ground, in frigid, freezing rain, temperatures. He wanted to live.

Rudy, no longer bandaged on March 1, 2015. He will require surgery to help protect his ear canal, but has made a remarkable recovery otherwise.

They immediately loaded him up and took him back to the Oklahoma City Animal Welfare’s facility, where Veterinarian Dr. Charlotte Kin met them. She instantly saw Rudy’s will to survive and requested that we take Rudy instead of putting him down. We immediately headed to the Shelter to bring Rudy home and start the healing process on him. His wounds were unlike anything we had ever seen. But, his personality was one that you couldn’t miss. He has such a vibrant, spunky, love for life, personality. He was so willing with everything that we did to keep him healthy.

Who is ready for a little Rudy and Double D on this beautiful Sunday?! These guys always know how to bring a smile to my face and enjoy life to the fullest.

Today, Rudy is amazing. His wounds are 98% healed. He is one of the happiest horses we have ever came into contact with. Everyone thinks he looks odd without his ears. I personally think he is beautiful without his ears and now he would look odd to have them. It is just who is he! He can hear, he can see and he can still live a full life. Rudy has became our mascot here and due to the extreme connection we have established, I believe that Rudy will live out the remainder of his life here, where we know he will never suffer again and his special needs will always be met.
How many horses are you typically able to care for at one time? How frequently are you able to adopt out horses to good homes?
I would love to see us remain around 80 head, however, the cruelty cases always seem to dictate how many we can care for at one time. We have had up to 200 horses in our care at one time. We certainly don’t want to have that many, but when you are called upon in extreme conditions, we can’t turn our backs on those horses, or the authorities needing help.  We currently have 158 horses in our program, mostly all on one property with a few foster homes. Which means, we have a lot of wonderful horses seeking their forever, loving homes. We have an 80% adoption rate. Typically, all the horses find their forever, loving homes; some take longer than others, but they are always here and waiting for that special family to come take them home. Sadly others, despite all our efforts, can’t be saved and we have to make that agonizing decision to humanely end their suffering. And a select few remain unadoptable, due to their medical needs/conditions. Those remain here until they are no longer able to live a happy, pain-free life.
How many volunteers assist at the rescue?
We have 11 wonderful Board members that are very active and heavily involved. Our entire family is dedicated, including my kids, and we have about 20 additional volunteers that are available for events, etc.
Please tell us more about Blaze’s Ride to the Rescue–I think this is a really unique program that has so much potential to bring rescue horses into the spotlight.

A trainer competing at last year’s Ride to the Rescue.

Blaze’s Ride to the Rescue Trainers Challenge is an amazing event that we started in 2011. Our goal was to show that rescued horses are just as capable as any other horses to perform. We wanted to break the stigma that people think they are used, broken or damaged horses. These horses have just the same qualities as any other horse. The only problem, they dealt with a bad owner that didn’t properly care for them. That isn’t the horse’s fault, and they shouldn’t be punished for what horrific event in their life they were dealt with. We have invited area trainers to compete. We paired 18 trainers with 18 rescued horses. These horses are healthy, fully vetted and ready for training. They just haven’t been started under saddle.  This helps gets the horses that otherwise take longer to get adopted, because they don’t have the foundation under saddle, and it highlights area trainers. 18 horses get the training they need in 140 days with a trainer. We will come together on May 30th, 2015 at the Lazy E Arena where the trainers and horses will compete against each other. Immediately following the competition, all horses are auctioned off to pre-approved potential adopters.
You can see some of the horses and trainers competing this year here: http://blazesevents.weebly.com/index.html.

The winning trainer and rescue horse team from the 2014 Ride to the Rescue.

Blaze’s Tribute Equine Rescue always has horses available for adoption looking for their forever homes. We applaud the good work that the rescue does and encourage readers to learn more about Blaze’s Tribute through the rescue’s website and Facebook page.
Go riding!
Many thanks thanks to Ovation Riding for their support of both Horse Nation and individuals and organizations that are doing good work in the horse world. If you know someone who deserves a Standing Ovation, we would love to recognize them in a future post. Email the name of the person or organization along with a message about the good work they do to [email protected] Photos/videos are always welcome, and include a link to their website if applicable.
Tweet