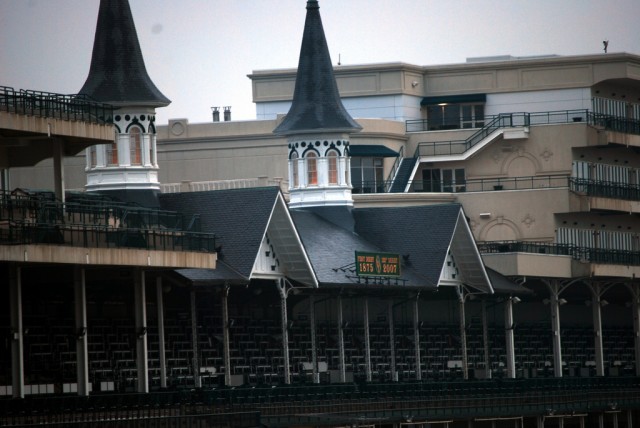 Sure, the juleps, the hats and the infield party are fab — but it’s the Derby’s emotional stories that captures our attention every May.

2015 is proving to be no different than past Derby years in its range of heartwarming stories about horses, trainers, owners and jockeys. The way that years of hard work and toil and crushing disappointment and soaring hope of literally hundreds of people can be condensed into two minutes of the most famous horse race in America never fails to take me on emotional trip on the first Saturday of every May. Here’s a look at some of the great stories that will be played out this Saturday, May 2 at Kentucky’s Churchill Downs:

Owners Ken and Sarah Ramsey have been together for almost 60 years, winning major stakes races all over the country — but never the Kentucky Derby. This year, they have a contender with International Star, who leads the field in prep race points. A victory on Saturday would be particularly meaningful for the Ramseys, who at this stage in their lives are simply grateful to be able to do what they love: Sarah suffered a stroke in 2006 that left her wheelchair-bound, paralyzed on her right side and drastically reduced her ability to communicate. Should the Ramseys finally be able to lift high the Kentucky Derby trophy this weekend, it will be as the culmination of a lifetime together with the racehorses that they love.

Zayat Stables, despite many strong prospects, has never won a Kentucky Derby, though its horses have placed as high as second. With three strong prospects in American Pharoah, El Kabeir and Mr. Z, perhaps 2015 will be the year that Zayat Stables finally makes it to the winner’s circle. (Incidentally, the “misspelling” of American Pharoah is credited to a contest held to name the colt, with the winning name submitted as-written. Whoops.)

Trainer Carla Gaines hopes to be the first female trainer to capture the Kentucky Derby in 140 years of its running. Her love for horses was sparked as a child, riding ponies on her grandfather’s farm in rural Alabama. She worked for a few years as a counselor, taking a sabbatical to “play” with the horses for a little while … and got hooked completely by the racing world. Her star horse and Derby hopeful Bolo could help her seal her place in history with a win on Saturday.

Contender Itsaknockout can add “marketing” to his resume as well as “Kentucky Derby runner”–the colt’s connections Starlight Racing worked out a promotional deal with the Mayweather-Pacquaio boxing match that will be taking place on Saturday evening after the Derby. The colt’s jockey Luis Saez will have “Mayweather” and “Pacquaio” printed on his pants on race day for a little last-minute advertising. Both Starlight Racing and the promotors of the boxing match are hoping to help each other capitalize on potentially record-setting crowds to bring attention to each others’ sports.

Trainer Kiaran McLaughlin has prepped Frosted for the 2015 Kentucky Derby, the latest chapter in a well-rounded career that includes working for Wayne Lukas. But considering that this trainer was diagnosed with multiple sclerosis in 1998, his accomplishments are that much more impressive. McLaughlin credits the horses with helping him overcome a deep depression after his diagnosis and got him back on his feet.

Described as the “dark horse,” Mubtaahij is a conglomeration of foreign interests: he is an Irish-bred, owned by an Arab sheikh, trained by a South African and jockeyed by a Belgian. Were he to capture Saturday’s Kentucky Derby, it would be quite the coup for a horse with entirely foreign connections. Interestingly, Mubtaahij has taken a unique route to qualify to run at Churchill through a big victory in the UAE Derby in Dubai.

Trainer Mark Casse and his son Norman run most of their races at Woodbine in Canada. However, Norman was born in Louisville, the third generation of his family to be involved in racing. The Casse family has ties to the Kentucky racing world, so a win on Saturday with Danzig Moon would not only mark their first ever Derby victory but serve as a homecoming as well.

Need more Kentucky Derby? Check out the race website as well as the YouTube channel for more great behind-the-scenes coverage. We’ll bring you a recap of the Derby itself this weekend. Go racing and go riding!