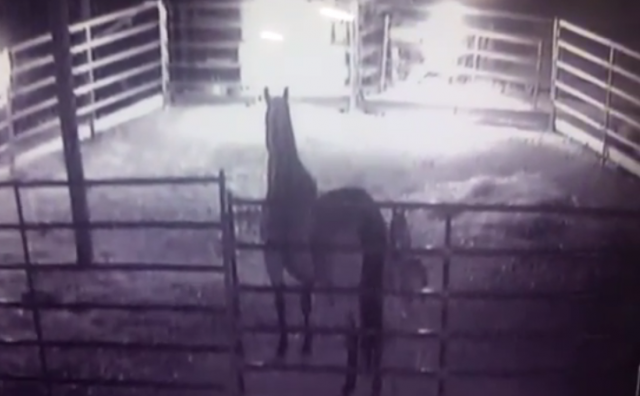 When a cougar sneaks into the corral where she and baby are sleeping, this mare’s protective instincts are on point!

What would you do if a cougar paid you a night time visit? I have a few ideas of the expletives that would spew out of my mouth and the racket that would be caused by my trying to scare the big cat away. I’m fairly sure there would be no grace involved in my encounter with a big cat of any sort.

So what happens when a cougar visits your horse’s corral, where she lives with her newborn foal? This is exactly what happened to Talea Morgan-Metivier, who has a camera trained on her corrals to capture incidents such as these:

The stuff of nightmares, right? This footage is from Chewelah, Washington, where surely cougars are not rare sightings. That doesn’t make this visit any less creepy though, especially on first impression when you wonder if the cat will corner the foal or do something else that is equally terrifying.

Fortunately, mama knows best as always and quickly confronts the unwanted intruder. It’s a pure case of protective instincts, and this mare doesn’t hesitate to defend her youngster — who seems more brave than scared of the cougar!

Talea explains: “There were actually three cougars at the panels for six hours. The one that entered was a yearling cub. The cougars attacked our dog the following morning and we had missing barn cats so decided to look at the security cameras to see what was going on the night before. Surprise! Great mama!”

Mother’s Day is rapidly approaching, and we think this mare deserves a special Mare Mother’s Day shout-out! We’re very glad that this unwanted visitor kept to his wits and scooted out of the pen. Thank goodness for good mothers.