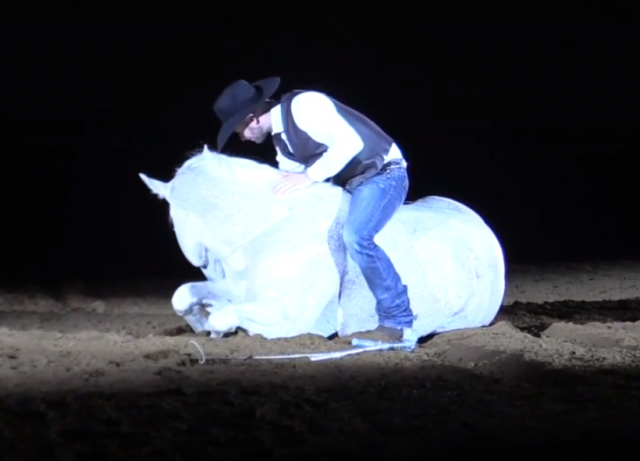 On March 6, 2015, a colt in training flipped over on Dan James, part of the renowned Double Dan Horsemanship team. His right leg was crushed and he was knocked unconscious. The injury to his leg threatened the limb itself, and James wasn’t sure he’d ever walk again, let alone ride. Compared with his hands-down victory in last year’s Freestyle World Championship at the Kentucky Reining Cup, James’ injury seemed to be a sobering reminder that life with horses can change at any moment.

But life with horses can also offer the chance to find out what you’re truly made of, to reach down deep and pull yourself up through any hardship, to use the horse’s otherworldly powers of hope and inspiration to do what you thought was impossible. And the gathered crowd for Saturday night’s Freestyle World Championship witnessed such a moment in an emotionally-powerful performance by Dan James and his stallion IRA Top Gunner.

(Please be advised that the following video includes images of Dan James’ injury that may be too graphic for some readers. Fast-forward past 0:21 to skip.)

James made the following comments about his ride, published in a USEF press release:

I had pretty much written off being able to compete. When I left the hospital I thought I would be lucky to walk again, let alone do anything with the horses in the next couple of months…about two weeks ago I thought maybe I could take that stud horse out there, tip my hat and be grateful to be walking. Then I thought if I could do that much, maybe I could get on….That was my fourth ride back.

And what a ride it was. While James did not earn a score for his performance, he moved the crowds so much that he was awarded the People’s Choice Award for the best freestyle performance and his amazing display of courage and horsemanship.

With horses, anything is possible. And no one knows that better than Dan James.