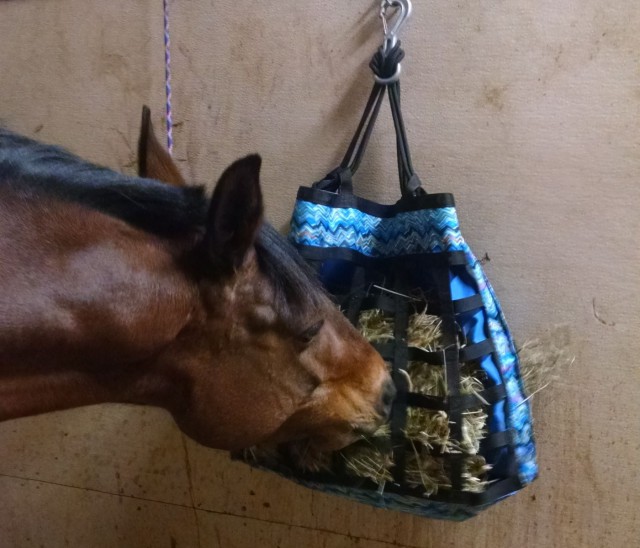 Lindsey Kahn puts it to the test.

Is your horse an easy keeper or a hard keeper? Whether it’s by luck or by choice, I have always owned horses that were easy keepers.

While my friends try different feeds, supplements, and heavyweight blanket combinations in attempts to keep precious weight on their horses during the long Minnesota winters, I have to spend the cold months “riding the crap” out of my fat, hairy, well-insulated ponies and monitoring their grain and hay intake to prevent them from popping like overcooked hot dogs. Summers are for dry lots, very limited grain, and small-hole hay nets.

Somehow, though, each one of my horses over the years has (pardon the pun) largely remained plump, if not downright rotund; one of them became known for literally eating his way through a grazing muzzle in order to get bigger mouthfuls of grass while on turnout.

Needless to say, each one of these voracious monsters will attack a hay net or bag with gnashing teeth, which usually leads to loud clanging noises during the feeding frenzy, a mess of hay, and the sad and inevitable destruction of said hay bag due to the relentless biting and tugging. After hauling to and from horse shows or trail rides, the repeated impacts of the hay bags’ metal snaps and rings have been etched permanently into the finish of the trailer.

Enter the Scratch Free Hay Bag from Professional’s Choice. This hardware-free solution to “violent” eaters and damaged trailer walls is economical and easy to use. Measuring 22″ tall and 23″ wide, it has a large capacity without the bulk that you might find with traditional hay nets, and the drawstring closure makes it easy to load, carry, and hang without a lot of wrestling.

When I first unfolded my new Scratch Free Hay Bag, I was impressed by the quality of the material. The bag itself is made of high-denier nylon that is smooth to the touch. The nylon webbing that forms the hay openings is reinforced with heavy-duty stitching, and the high-quality drawstring is soft yet durable. Right away, I was certain that this hay bag could withstand a great deal of abuse, and I couldn’t wait to put it to the test.

Because show season wasn’t quite underway, I decided to first try the Scratch Free Hay Bag in my mare’s stall. Firefly is a Thoroughbred/Connemara cross with an insatiable appetite, so I figured she would make an excellent test subject. During a meal, her stall usually looks like this:

Didn’t your mom ever teach you not to stand in your food? Photo by Lindsey Kahn.

I loaded two flakes of hay into the hay bag (I can easily fit in three flakes of our home-grown hay without struggling to pull the drawstring closed) and hung it in Firefly’s stall. The long drawstring made for a great deal of adjustability, whether you need to cinch the top opening tightly closed or hoist the hay bag up high.

As my horse went to town on the hay, I noticed that the webbing controlled the amount of hay she could grab without getting in the way of her teeth; I have replaced many a small-hole hay net over the years from ripped and unraveled netting, so I definitely saw how the nylon webbing would give the Scratch Free Hay Bag greater longevity.

Chunky ponies, eat your hearts out. Photo by Lindsey Kahn.

The front of the hay bag has openings on the bottom half, and the back contains openings over a larger area; on both sides, the openings measure 3.5″ by 2.5″ and allows the horse to eat without having to violently yank the hay out of the bag. It ended up being a simple yet effective way to control my horse’s intake while keeping the stall tidy.

The Scratch Free Hay Bag lived up to its name; as the hay bag rocked back and forth from my horse’s tugs, the only thing could have scratched the stall wall was the aluminum clip from which it hung. The hardware-free construction of the bag was practically silent against the wall.

The Professional’s Choice Scratch Free Hay Bag is designed not to scratch your trailer. Photo courtesy of ProfChoice.com.

After my horse finished her meal, I found that the hay bag had retained its shape and construction, with hardly a sign of wear. The large top opening made it easy to wash out the inside and leave the bag out to dry. I figured that if Firefly couldn’t beat the hay bag up in her stall, I could move on to Stage Two, which was testing it out in a trailer.

Griffin, my Rocky Mountain pony, can be just as violent with his food as Firefly. He also has an uncanny ability to destroy just about anything to get at the food within, and I hoped that the pretty blue nylon could withstand his ferocity. In order to further test its “scratch free” design, I opted to tie the hay bag up in the trailer rather than clip it.

Behold, the face of a cold-blooded hay net killer. Photo by Lindsey Kahn.

Lo and behold, my pony’s relentless appetite put the hay bag to the test, but Professional’s Choice came out on top. While he devoured the hay, the hay bag made nary a sound against the inside of the trailer. When I checked the surface after I finished unloading Griffin, I couldn’t find any (new) scratches or dings on the trailer walls… though there was plenty of pony drool from where Griffin had tried chewing on the hay bag.

All in all, the Professional’s Choice Scratch Free Hay Bag stood up to the abuse inflicted by both of my horses, and made it into my tack trunk as an essential piece of equipment for when I travel with my horses to shows and trail rides.