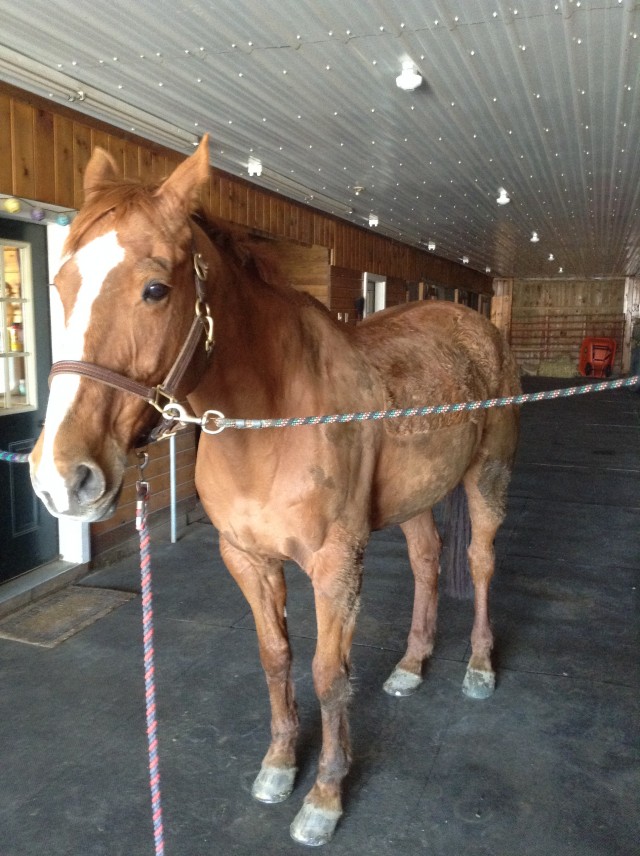 Lila Gendal has a bone to pick with , er, spring.

Spring has finally made its debut for the year! New Englanders have begun stretching their legs as they crawl out of their caves, blinking their eyes, as the massive foreign burning light in the sky lures critters and humans from every crevice and corner.

Vermonters have been dreaming of this moment for some time now: this winter was exhausting and seemingly never-ending, as it lasted from late November through the middle of April. Even though there’s still white-frozen-crunchy stuff scattered across the farm, the sun keeps shining, and the brown and crusty surroundings will soon transform into a breathtaking green, sprinkled with yellow dandelions in a matter of days!

The only, ONLY, annoyance this time of the year is the mud. Ask any Vermonter about mud season, and he or she will give you an honest and heartfelt answer in less than one nanosecond: IT SUCKS.

Mud season seems especially formidable when you add horses into the mix. Living on a farm during mud season doesn’t always bring a smile to every rider’s or farm owner’s face. So, without further ado, I’d like to introduce my top three woes associated with mud season:

Ah, that moment we’ve all been waiting for: the single moment in time when we are finally able to strip our poor itchy and furry horses. They love to be naked and we love seeing them naked. It almost seems like a win-win, until the inevitable rolling commences. One sunny afternoon you leave your horse perfectly groomed and looking absolutely picturesque, until you find your foreign-looking mud dweller the following morning. Not only does a brush not get the mud out, you have to wait around for hours until they’re dry enough to curry the crusty filth out of their fur.

If you live “Up North” you are familiar with unpaved roads. Many Vermonters live miles and miles down and up and over back dirt roads. Of course, we consider private Vermont property precious as we gaze out our bedroom window and get lost in the breathtaking view of the mountains and pastures. Though, in order to get to these tiny slices of what we consider to be equivalent to heaven, one must deal with the dicey and treacherous dirt roads during mud season. By week TWO, you are fully enraged, blood pressure rising, and screaming all sorts of profanities at Mother Nature.

The pastures and paddocks from hell

Yes, that’s right, I saved the best for last. My nemesis this time of the year is any paddock, field, or pasture that was previously occupied by four-legged beasts for the better part of a New England winter.

Everyone has their own system and their own idea of what constitutes as “easy” as far as winter chores are concerned. Some people refuse to allow their precious darlings to battle the winter forces, so instead they have horses inside a great deal. Others leave their horses out, and some probably combine the two strategies. We had horses basically living out in a herd all winter long, which seemed idyllic at the time. They had a heated water tank, tons of hay and shelter. On the really nasty nights, they came indoors.

Bottom line: I can’t see a bottom line or level in the field they occupied. What a disaster. Mud, hay, nastiness everywhere. It’s such a disaster I shouldn’t even be sitting here writing about it, I should be picking away at the sludge and slime.

My name is Lila Gendal and I am 28 years old. I am from Vermont and have been riding horses since I was 6 years old. I have been eventing since I was 10. I have been riding and training with Denny Emerson for the last 7 years. My goal is to compete at the upper levels someday. I’m currently leasing an awesome ISH gelding named Theatre Royal (owned by Gayle Davis), and we are going Prelim. When I am not on a horse or in the barn I am likely working in my office on what I like to call Equine Media, or social media for equestrians and equestrian websites.