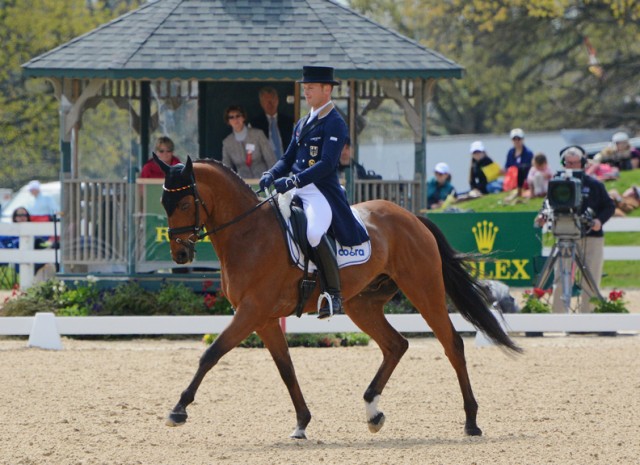 Jenni Autry brings us the latest from the U.S.’s premier four-star event in Lexington, Kentucky.

Horse Nation’s sister site Eventing Nation is live on the scene all week long at Rolex. Check in often for the best, most comprehensive coverage on the web!

I think we all expected Michael Jung and La Biosthetique Sam FBW to be sitting in first place at the conclusion of dressage at the Rolex Kentucky Three-Day Event, though I’m not sure we expected him to be sharing the top of the leaderboard with anyone.

Michael and Sam couldn’t quite replicate the score of 33.0 they laid down the last time they fancy pranced in the sandbox at Rolex stadium during the 2010 World Equestrian Games, but they came close enough, scoring 36.3 to sit in equal first place with Tim Price and Wesko, who delivered a lovely test this morning.

Last year’s winner’s William Fox-Pitt and Catherine Witt’s Bay My Hero are still firmly in the mix, scoring 38.5 to sit in third place. They were not aided by the stands erupting into large cheers when they trotted into the ring, and “Moonie” looked like he wanted to turn around and go right back out. William got him back well in hand, executing a perfect square halt right in front of the grandstands before going into the ring and getting the job done.

Michael’s leading dressage test from yesterday with fischerRocana FST has him in fourth place now on 39.3, one of four tests to ultimately crack the 30s threshold. As to whether he’s planning to run both horses cross country tomorrow amidst rising concern over forecasted thunderstorms, he told USEF Network: “We will see. I will ride the first one. Then we will see. Sam is a tough guy.”

In addition to the impending doom of the weather, the big story of the afternoon has to be Colleen Rutledge and Covert Rights, who are leading the American charge in fifth place on a score of 42.3 after delivering a truly impressive performance. Colleen bred “CR,” who is out of her very first Advanced horse, and has ridden him for every single one of his competitions, which makes this all the more special. We’ll have much more on Colleen shortly, so check back soon.

In continuing to run down the top 10, Mackenna Shea and her own Landioso, the Rolex Rookie stars from the morning session, are sitting in sixth place on 43.7, followed by Laine Ashker and her own Anthony Patch on 44.2, who went yesterday morning to sit inside the top three after Day 1. Lauren Kieffer and Team Rebecca’s Veronica are well within striking distance in seventh place after scoring 44.3, which bests their score from last year by 2 points.

Marilyn Little and Team Demeter’s RF Demeter scored 44.3 for eighth place, which is their best dressage score at a four-star since they competed at Rolex in 2013. Jessie Phoenix and Don Good’s Pavarotti round out the top 10 on a score of 45.0; she has said she only plans to do the dressage with “Rotti,” so we expect to see her withdrawn soon, which would move Nicola Wilson and Mary and Barry Tweddle’s Annie Clover into the top 10 on 45.6.

We’ll have a full report coming your way next on the rest of the Americans sitting inside the top 20, so keep checking back to EN. Relive all the afternoon action in EN’s open thread at this link, see the full live scores here, watch video playback of all the tests courtesy of USEF Network here, and read all our #RK3DE coverage to date here.