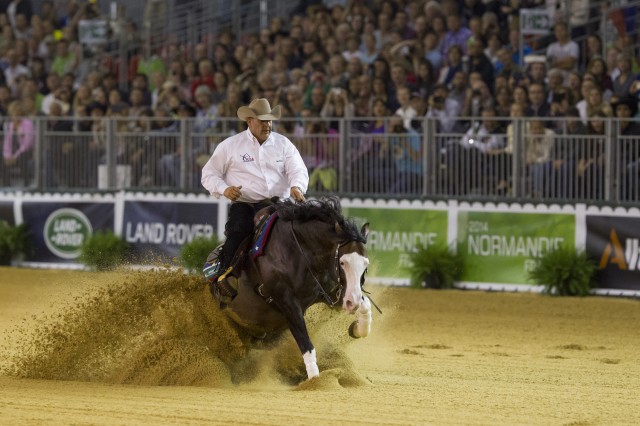 While most of us will be fixated on Rolex this weekend, the Kentucky Reining Cup is also rocking the KHP!

Shawn Flarida and Spooks Gotta Whiz at the 2014 WEG after qualifying at the 2014 KRC.
© Hippo Foto Team – Leanjo de Koster

Because there’s not possibly enough excitement to sustain us, what with that little shindig called Rolex going on at the same time on the same property, the Kentucky Reining Cup takes place at the Kentucky Horse Park April 24-25, this Friday and Saturday. Called the “crown jewel” of the FEI reining schedule, the Kentucky Reining Cup (or KRC) draws the best reiners in the world for an exciting two days of competition including the famous Freestyle World Championship.

The KRC has run with Rolex for five years now, drawing both a regular and devoted crowd of reining fans as well as eventing enthusiasts who are already “in the neighborhood,” offering both disciplines the chance to reach out to new groups of equestrians. Friday evening hosts a number of concurrent classes which run as the Concours de Reining International 3-Star and Team Challenge: also running are two NRHA classes, an Open and a Non-pro with $10,000 and $5,000 added respectively. (Total prize money for the Concours de Reining International is $120,000.)

“Super Saturday,” as it’s now known, packs a powerful one-two punch as cross-country runs all day and the Freestyle World Championship takes place in the evening. Tickets for the freestyle typically sell out, so if you’re already going to be at the Kentucky Horse Park for Rolex you might want to pick up those freestyle tickets sooner rather than later. You might recall last year’s freestyle world champion, Dan James and Smart Little Elan:

We’ll bring you results and highlights from the KRC next week!