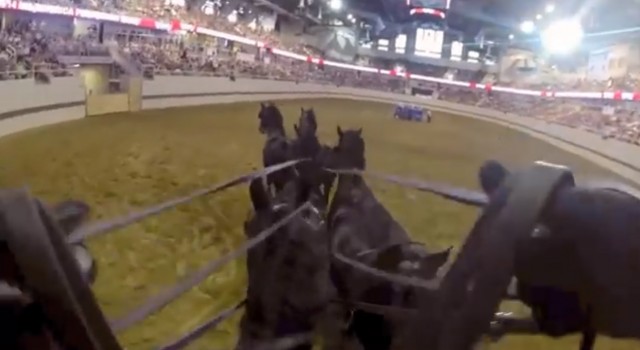 Driving a draft six-up is hard enough … but riding a six-up Roman-style is in a class of crazy all by itself.

Jason Goodman must be an adrenaline junkie. That’s our only explanation for how he can Roman-ride six (yep, count ’em) Percherons all over the country in coliseum after packed coliseum with little more than lines and voice to control them. That’s six tons of horsepower, folks, trotting and cantering before huge cheering crowds with one man balanced on the backs of the wheel team. We introduce to you Percheron Thunder:

Juggling the lines to six fast-moving horses is hard enough when you’re comfortably ensconced on a wagon bench, but keeping your team in line when you’re also attempting to stand on two of them is a real feat of multi-tasking, core strength and intuition. Those front horses are probably about 20 feet away from Goodman while he’s driving, which presents a real challenge of control, especially over the loud crowd and pounding music. These are some well-broke horses who are clearly accustomed to being in the spotlight!

Jason Goodman and Percheron Thunder crisscross the country for a large part of the year performing at expos and events in two, three or five-minute demonstrations. Percheron Thunder also makes a number of community visits and meet-and-greets as draft horse ambassadors, allowing people to get up close and personal with the gentle giants. The team’s most recent performance was at the FEI World Cup in Las Vegas, and they’ll appear next at Bishop Mule Days in California.