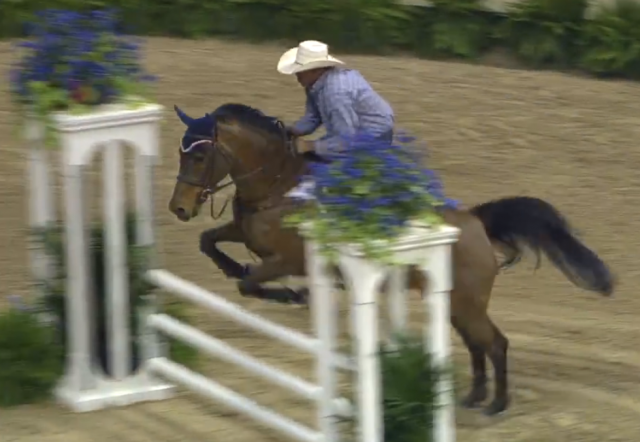 Only in Las Vegas…

The World Cup brought the best riders in dressage and show jumping to Las Vegas last weekend, but no trip to America’s entertainment capitol would be complete without some…well, entertainment. So World Cup producer Shawn Davis came up with the perfect competition that would blend the elite equestrian contest with the American west’s cowboy heritage, and had three of the top World Cup show jumpers swap disciplines with three reined cow horse riders for a little friendly rivalry on Saturday night at the the Thomas & Mack Arena.

Tucker Robinson, Zane Davis and Brandon Buttars joined the fun to represent the National Reined Cow Horse Association, and the show jumping contingency was represented by Tanya Levorchick (subbing in for Beezie Madden, who decided she was going to sit this one out,) Lucy Davis and none other but the soon-to-be 2015 World Cup champion Steve Guerdat.

The guidelines were pretty simple: riders were paired up across the disciplines, got a brief schooling lesson from their partner, and then tried their luck. (The cowboys did not ride the World Cup jumpers, but good, solid citizens who were brought in just for this event.) Now, I’ve been lucky enough to get to ride both over fences and reined cow horse in my equestrian career, and let me tell you that I would not have been ready to perform EITHER event in front of a huge crowd with just one lesson, so hats and helmets off to these fine riders for giving it a shot on the international stage. In the defense of each group of riders, they did what most of us would probably do when thrust into a new situation with very little prep and went to their hands first.

Tucker Robinson and Lucy Davis provided plenty of entertainment; Robinson had several rails down and a fairly rough moment after losing his canter up to an oxer (an OXER. Keep in mind these cowboys have not formally jumped in their lives…ever) and I was pretty disappointed that none of the cowboy contingency chose to wear a helmet. That aside, he did a pretty good job “winging it.” Davis lost control of her cow and did quite a bit of lapping the arena with it (don’t sweat it, girl, this was the story of many of my first trips down the fence.)

Duel in the Desert: Reiners vs Jumpers – Team Tucker Robinson and Lucy Davis …click on the link for more info http://bit.ly/1ET63MA #WranglerNFR #WorldCupLV

Zane Davis and Tanya Levorchick did credit to each other’s disciplines, with Davis demonstrating what I thought was pretty solid equitation over the fences. He did pull a few rails and then got lost and jumped a fence backwards, which would disqualify him from any normal competition. Levorchick was a little hands-y at the start of her run, but to be fair had A LOT of horse. She stuck with her beefcake of an animal impressively and made a few decent turns.

Brandon Buttars was probably the most terrifying-looking of all of the cowboys over fences, but stuck with it and got the job done. Steve Guerdat burst into the arena in a wonderful “wenglish” outfit consisting of his tall boots, breeches and jacket topped with a cowboy hat (which promptly flew off his head three seconds later) and then proceeded to lay down an exciting trip with his cow, maintaining a beautiful upper body position the entire time. Guerdat reportedly loved riding the cow horses with their natural instinct to move with the cow, though he said he would be sticking with the jumpers for now.

Once the dust settled, it was simply amazing to see each discipline embrace the other in the spirit of the evening. Considering what these horsemen and horsewomen managed to pull off with just a little bit of practice, I’d say they’re off to a great start.